KIRBYVILLE — The Kirbyville Wildcats had the credentials.

Bridge City had nothing to lose.

The Cardinals stepped out of the shadows of a 2-8 season to upset the preseason No. 4-ranked Wildcats 24-21, giving head coach Dwayne DuBois his first win as BC’s new leader.

“I’m so proud of them,” DuBois said of his players. “It’s confidence. They’re coming off a tough season last year. Winning this first game gives them the confidence to believe in what they’re doing.

“Our guys will walk a little prouder in practice next week and we’ll take that confidence with us into the rest of the season,” he said. “Winning tonight was important for us.”

The Cards utilized a pounding run game to overwhelm the Kirbyville front line, racking up 287 yards on the ground, led by Patrick Morris’ 125 yards on 13 carries.

The Wildcats, who reached the regional semifinals last season, showed their experience after being down 21-13 in the second half. Kirbyville earned new life after a BC fumble early in the fourth quarter, one of the Cards’ few mistakes in the game.

It took the Cats 12 plays to go 82 yards for the score with Patrick Beaty doing the work with six runs for 34 yards, including the one-yard scoring jaunt. Beaty bulled in for the 2-point conversion and the game was tied with 6:49 left in the game.

On the ensuing possession, BC ran the ball 12 straight times, burning the clock and marching to the 4 yard line where they settled for a 25-yard field goal by Alfredo Heraldes, giving the Cards the 24-21 advantage.

In tune with their performance throughout the night, Bridge City’s defense stood strong down the stretch, denying Kirbyville anything on its final drive, forcing the Cats to turn the ball over on downs and ending the game.

The Cardinals took their 21-13 lead thanks to an incredible interception return y Zach Honeycutt. With Kirbyville driving for what would have been the go-ahead points midway through the third quarter, Honeycutt nabbed a Kirbyville pass at the goal line, sprinting 100 yards for the BC TD and the lead.

“After the first two drives by Kirbyville, I was a little nervous” Coach DuBois said. “I told our guys on defense that they had to tighten up. They played a heck of a game. They rose up and played hard.”

For the Wildcats, Jackson Gore completed 11 passes for 172 yards with Devon Tyler hauling in five for 77.

Bridge City held a narrow edge at the halftime break, surprising the Wildcats defense with a misdirection offense that kept Kirbyville on its heels.

The Wildcats opened the game with a sustained march down the field, moving 92 yards in 12 plays with Ty Dennis crossing from eight yards out for the 7-0 lead.

During that drive, the Cats faced two third down situations, both resolved by passing attempts. The first was a 12-yard connection between Gore and receiver Jalon Dennis. The next time the Wildcats faced a third down, a Bridge City defensive interference call was the answer Kirbyville needed.

In the first offensive drive for Coach DuBois, the Cardinals did indeed impress. Playing with a short field after a Kirbyville unsportsmanlike foul, the Cards drove 58 yards in 10 plays with Draper doing the lion’s share of the work. Draper ran the ball five times for 40 yards in the drive but it was Morris who found the end zone from the 7 yard line. The extra-point kick tied the score at 7 apiece.

“Kirbyville came out and zip, zip, zip and scored. They’re explosive and they’re fast,” DuBois said. “For us to come back and methodically move down the field, it was really big for us to be able to match their score with a score.”

Kirbyville was quick to respond, moving 75 yards in just six plays, one being a 38-yard rip. Beaty finished the drive with a 16-yard run for the score. A bobbled snap on the PAT left Kirbyville up 13-7 with 1:03 left in the first quarter.

The two teams swapped punts for the only time in the half with Bridge City taking over at its own 29 midway through the second quarter.

After Morris took off on a 20-yard run to start the drive, DuBois completed his first pass of the game, a 35-yard strike to Kane Booth. Morris picked up 16 more, setting up DuBois for the 4-yard push up the middle. Heraldes booted the extra point for the Cardinals’ 14-13 lead.

Kirbyville’s ensuing drive would be costly. After driving the field for what appeared would be another Wildcat score, Dennis – the Cats’ top returning running back – carried the ball up the middle, getting hit hard. He would leave the game and not return after posting 102 yards on 13 carries. 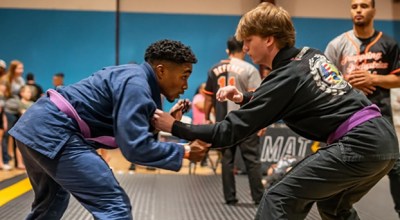