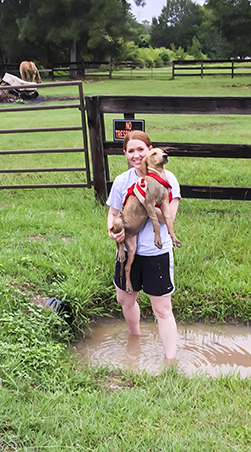 Courtesy photo Kara Carline rescued a puppy hiding in a culvert on Thursday near Farm to Market Road 1130 in Orange.

A puppy with an obsession for muddy culverts has found a temporary home after Kara Carline, of Orange, coaxed the scared canine out of the second culvert the dog found to hide in in two days.

Several puppies were dumped on South Teal Road in Little Cypress on Wednesday. A man reportedly was able to rescue all but one, the skillful golden beauty.

Traci James, a known animal rescuer, heard of the young lab puppy and was able to coax it out of the culvert on Thursday. James turned the lovable puppy over to another woman in Orange who also helps foster homeless animals.

However, the golden haired puppy was not quite finished with her adventures.

The stray escaped the woman’s car and again hid inside a culvert near Farm to Market Road 1130 in Orange.

This is when Kara Carline steps in and becomes a puppy’s hero.

Carline heard about the puppy and attempted to coax the scared pup out of the culvert. When coaxing and bribing with doggy treats did not work, Carline went inside the culvert fighting water, mud and ants to save the scared puppy.

Kara, with her parents, Nathan and Michelle Carline, are fostering the young tail-wagger while the golden beauty is placed for adoption.

The puppy would not comment on why she was inclined to hide in culverts.

If you know of a hometown hero, send pictures and contact information to editorial@orangeleader.com.