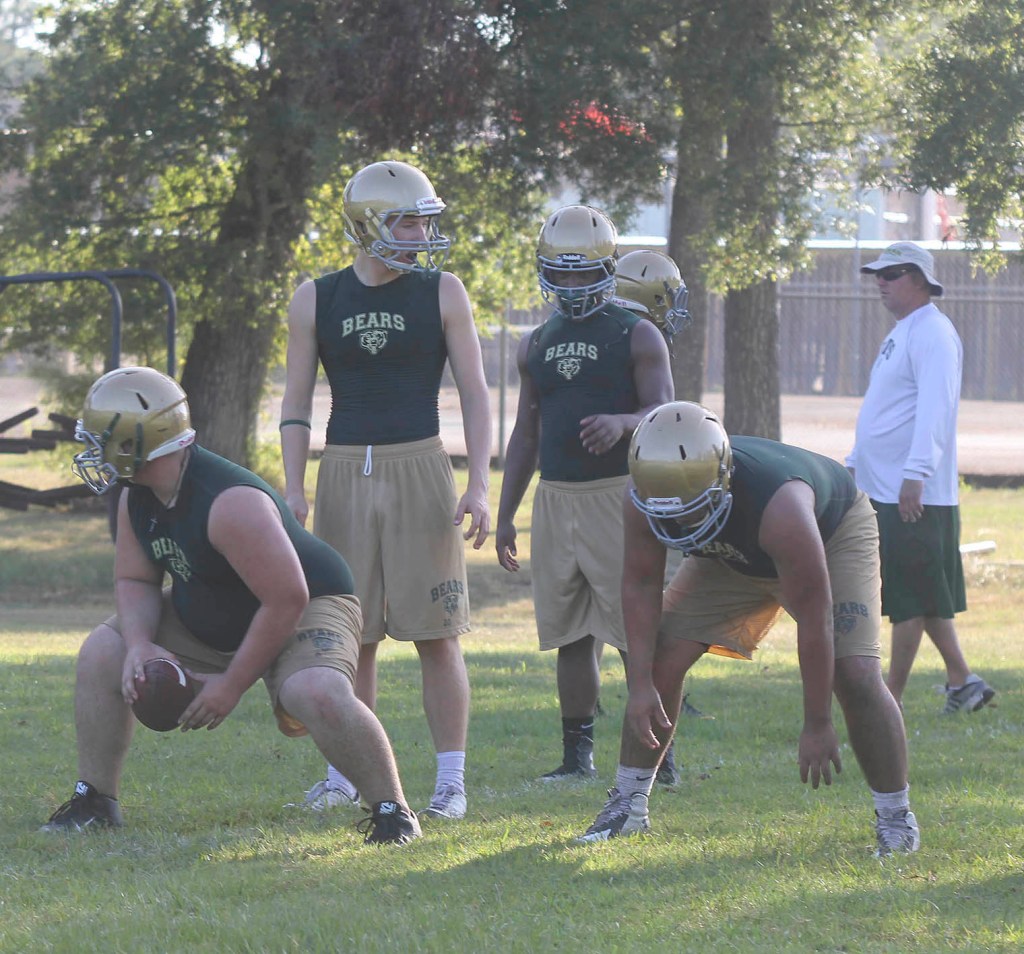 LITTLE CYPRESS – Over at Little Cypress-Mauriceville, the Battlin’ Bears hit the practice field hard this week, beating the heat and learning some new formations, especially on offense, as they are getting prepared for the upcoming 2015 campaign.

Coach Randy Crouch and staff will be looking to lead the Bears to their third consecutive playoff berth. LC-M went 5-6 overall last year, falling to Carthage in the bidistrict round of the postseason. They were impressive in District 10-4A Division II play, going 4-2 to take the third-place playoff spot.

The Bears will be returning five starters on both sides of the ball.

“You gotta love this time of the year, even though it is hotter than usual,” said Crouch. “That doesn’t bother the kids as much as it does some of us old coaches. The kids came in after having a pretty god summer and they’re showing a lot of enthusiasm and they’re ready to learn. We’ve got some key kids back but we also lost a big senior class, so some of our younger ones are having to pick up things pretty quick.”

Coach Crouch is happy with the numbers. The Bears have close to 125 players in the program across the three levels in grades ninth through 12th.

‘Those numbers are pretty good, a little better than they were last year, said Crouch.

The Bears worked a lot on conditioning Monday through Thursday and learned some new formations before they headed out to Battlin’ Bear Stadium on Friday at 12:01 a.m. for “Growl at the Moon” as they were able to lace up the pads for their first full-contact practice.

The Bears are adding a few wrinkles this year, especially on the offensive side of the ball. The Bears will turn to a more bruising type of running style by utilizing the Slot-T.

Schools like Vidor, Orangefield and Hardin-Jefferson have utilized it successfully over the last several years.

“We’ve been primarily a spread and I-formation team over the years and I think this will be a nice change,” said Crouch. “We’re not just going to go out there and run, run, run though. We will still line up in the spread and I and put the ball up in the air some. We still want to be able to be versatile.”

The Bears’ first scrimmage will be at Port Neches-Groves Aug. 14 and LC-M will then host Orangefield in a scrimmage tilt Aug. 20.

The Bears will open their 2015 campaign on the road at West Orange-Stark Aug. 28.

“Our district is going to be tough, tougher than it was last year,” said Crouch. “But first, we’ve got a tough non-district to navigate through, going to WO-S and Goose Creek Memorial and then tackling Barbers Hill and Hardin-Jefferson here at home.”

The District 10-4A Division II season should be quite interesting as a lot of teams are bringing back a slew of returning starters.
“Jasper is the defending district champ and they have nearly everyone back,” said Crouch. “Silsbee was young last year and they have a ton of folks back. Bridge City has a young team still that is bringing back a lot of kids and Coach (Dwayne) DuBois will have them on the rise. Huffman will be strong again and Splendora looks to be better. I think our kids are up for the challenge and we’re looking forward to it all kicking off.”