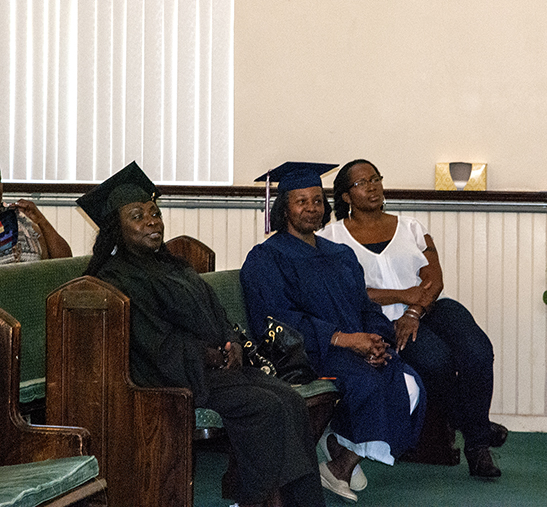 ORANGE — “It’s never too late to graduate” is the motto of Whale Christian Academy of Orange.

“Olivia Wilson is the oldest graduate of the academy,” Education Advocate Ulysses Hobbs. Jr. said. “The school is another source for over 21 year olds to receive an education.”

Over 120 persons have used the program to receive a high school diploma since its inception according to Hobbs.

“This started as a vision of Frank Anderson with Anthony Jackson and Rev. Crawford,” Hobbs said. “Some of the graduates could not be present because they are working or unable to attend for other reasons.”

One of those reasons is the Man of God program at the Church. Graduates involved with the program were feeding homeless persons in the area instead of walking across the stage to receive their hard earned diploma. Only five of the 18 graduates were able to attend the ceremony.

“The Man of God is part of this,” Linton Pappillion said after the ceremony. “Frank Anderson came with a vision to educate the people, with Mr. Jackson, Hobbs and Rev. Crawford, to make life abundant for people searching for God’s truth.”

Pappillion said the academy is uplifting the people.

“We are one for God and the people,” Pappillion said.

Olivia Wilson, of Orange, said she found out about the academy when a judge required obtaining her GED.

“It was part of the stipulation for the trouble I got into,” Wilson said. “I am very grateful for the academy. My mind was not set on school and I left in the 11th grade. “

District Judge Dennis Powell was unaware of the school until he asked a person on probation what their plans were to obtain their GED.

“She said she was not going to get her GED, she was going to graduate,” Powell said. “I told her if she graduated, I would be there. There is pride here and a sense of accomplishment. This is good for the community.”

Powell also said he would, in the future, suggest Whale Christian Academy of Orange as an option for completing ones education.

“Paying attention to life,” Jacorey Walker said when asked why he opted to return to high school. “You can’t make it without an education. Education is the future. I thank God for everything.”

Vada Wills, 59, returned to school so she could attend college.

“I want to set an example for my children and grandchildren,” Wills said. “It is not too late. Now I know I can finish what I start.”

With her husband and daughter’s support, Wills found the courage to continue her studies.

“My husband would say, ‘You can do all things through Christ,” Wills said. “Graduating is a great thing. Thank God I was able to do it.”

Willemina Walker, 35, has already received approval for financial aid for college and plans to seek a degree for Drug Counseling now that she has her high school diploma.

“I had my first child at 15 and living a poor life style involving criminal activity,” Walker said as to why she did not complete high school as a teenager. “People can always change. I wanted a better future.”

Walker heard about the school through her sister, Tymecia Southern.

“She is my inspiration,” Walker said. “I am not going to stop here. I put a vision on my head and become the person I want to be. I have a good life ahead of me.”

District Judge Dennis Powell, during his speech, told the graduates to not be defined by their pasts.

“Everyone has a past. Apostle Paul had a past,” Powell said. “Be honest about where you were at but have a vision ahead. You are finishers. The measure of a person is not what it takes to get them started but what makes one quit. You are finishers. We all have a past. It does not define us. No one can define you unless you give them the power.”