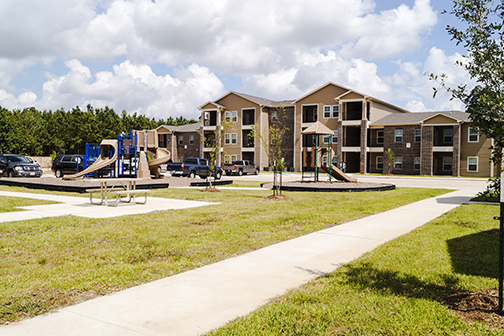 ORANGE — K.T. “Ike” Akbari had a vision, which was not diminished by negativity, adversity or even his death earlier this year.

Velma Jeter Manor and Willow Bend Apartments are nearing completion as ITEX and Housing Authority City of Orange hosted tours through the complexes on Tuesday.

Housing Authority City of Orange Board of Commissioners Chairperson Michael Combs said arriving to this point has been quite a trip.

“No one likes storms,” Combs said during the grand opening tour of Velma Jeter Manor on Tuesday. “Through help and suggestions from then Mayor Claybar we were able to get started. Akabari had a vision and got us in this direction.”

Combs said Akabari even proposed backing out of the project if necessary for it to move forward.

“Most important are our clients,” Combs said. “They need a safe place to live, then they can develop their dreams. We are here to give dreams possibility.”

With 40 applicants for Willow Bend Apartments, those dreams could start as soon as August.

“I love seeing this project today,” Crozier said. “It is incredible and phenomenal. ITEX is great. I am glad to help with the process.”

Crozier also said complexes were what the Community Development Block Grant (CDBG) was designed to do.

“Orange is the first in Round Two to put units on the ground,” Crozier said.

Chris Akbari, of ITEX, said the first residents are expected to move in approximately August 15.

“This is part of the restructuring of housing projects,” Akbari said about the new complexes.

Patricia Coppage, vice-chairperson of the Housing Authority City of Orange said it was a long hard road but the projects are almost to an end.

“I am so proud of the quality housing for those in need,” Coppage said. “It is a plus for the whole community.”

Mary McKenna, a former commissioner of the Housing Authority City of Orange and now City of Orange Councilmember, said “Ike” Akbari was the visionary of the projects.

“Ike saw this when I could not,” McKenna said. “Look at all that has been done. Lots of good came from the storm.”

U.S. Department of Housing and Urban Development Dr. Edward L. Pringle said the developments are to ensure families have affordable housing to make a home.

“This will become home for a lot of people,” Pringle said. “It will give them pride.”