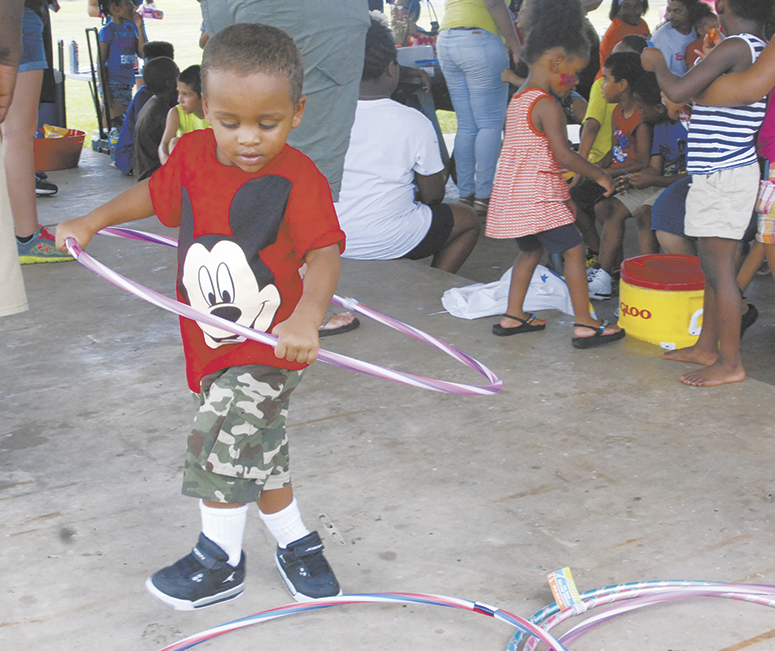 Dawn Burleigh/The Orange Leader King Wilson, 2, of Orange, enjoys playing with a hula hoop during Orange Family Day, an event hosted by the Matthew 19:26 With God All Things Are Possible group on Saturday.

Jesus looked at them and said, “With man this is impossible, but with God all things are possible.” – Matthew 19:26

Deshone Lea, one of the organizers of the event, said the group hopes the event is the first of many to come.

“It is part of giving back to the community,” Lea said. “We want the kids to know people care and help steer them the right way.”

Lea also said event was held through the assistance of several volunteers and donations from local businesses such as Granger Chevrolet.

“The Police Chief and Mayor were here earlier,” Lea said.

The organization is a non-profit group formed by friends with the desire to give back to the community.

Larry Spears Jr., a City of Orange Council member said the organization was something he wanted to do as a citizen.

“We are just a group of friends seeing the negativity in the community and asked ourselves what can we do,” Spears said. “We were raised to put God first, thus the name of the group. We are here to have fun and show the love.”

Larry Nelson said the organization is an avenue to do God’s work in the community.

“We want to help the kids, youth of the city,” Nelson said. “This event is just a small footprint the foundation. We want to put God back into the community and the city.”

The foundation will join the West Orange Stark Alumni Foundation next Saturday for Adopt-A-Highway clean-up. The organization also is planning a Sports Training Camp at Lion’s Den in the near future.

“As a volunteer, you have to give to those who can’t give back,” Nelson said. “There are no limitations on these kids. They need to know their voices are heard and the possibilities. This is an outreach program with volunteers. This is the path God gave us to love our city.”