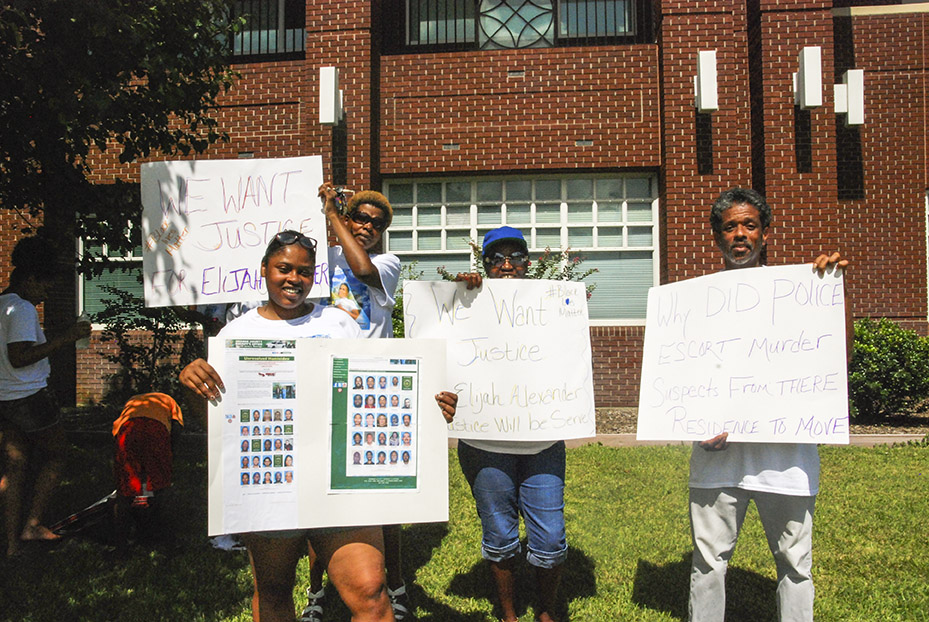 Dawn Burleigh/ The Orange Leader Family members hold up signs after a press conference on Saturday at the Orange Police Department. Family and friends of Elijah Joseph Alexander want justice for him. Alexander, 22, was shot and killed on May 30, 2015.

ORANGE — A family wants justice for death of Elijah Alexander.

Alexander was shot and killed Saturday, May 30, 2015 as he returned home from fishing with a friend.

“We [the family] are taking this very serious,” Joseph Wiltz, Alexander’s uncle, said in a press conference on Saturday held in front of the Orange Police Department (OPD). “We want an arrest. We will not stop until justice is served.”

According to a press release from Orange Police Department, two men were in a dispute at the time of the incident.

“The police should not have released that information,” Wiltz said.

Wiltz said the information the police department provided the media was inaccurate.

“We are disappointed an arrest has not been made,” Wiltz said. “Just days after the murder, police officers were seen escorting the suspects as they removed items from their house as they moved from the residence. Is this common practice to help a suspect move out of the jurisdiction? We are bothered by this. ”

Wiltz said he asked the police department concerning the incident but could not recall the exact response.

Wiltz, during the press conference, said the family is concerned in reference to rumors the suspects have a connection with someone possibly slowing down the investigation.

“The murderer is still on the street and police knows the suspects,” Wiltz said. “The police say they are waiting for ballistic and autopsy results.”

Wiltz also is concerned the suspects, who’s names have not been released my the police department, are saying the incident is self defense.

“Alexander was fishing when he was followed by these persons,” Wiltz said. “He was walking to his parents house.”

Wiltz also showed posters of posts made on facebook from the suspects around the time of the event.

“We believe this shows the state of mind of the persons,” Wiltz said.

Wiltz also said the posts on the social media site moved this was not a spontaneous chain of events.

The family plans to request the Justice Department and the Federal Bureau of Investigations to investigate the case and possible ties between the police department and the political arena in connection to the case.

“I do not call it self defense when one is followed through the neighborhood,” Brenda Johnson, Alexander’s cousin said. “I call that murder.”

Johnson said the suddenness of Alexander’s death left the family with the unexpected costs of a funeral.

“It was hard to raise funds for the funeral when it was called a shoot-out,” Johnson said.

“No justice means no peace for the family,” Virginia Odell, Alexander’s cousin said.

Since January 2005, there have been 19 murders in the city of Orange, of those only two remain unsolved at this time.