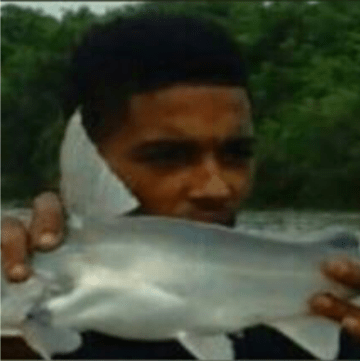 ORANGE — Marsha Guillory, 21, recalls the details of the last time she saw Elijah Alexander alive. The couple had been inseparable for the last four and a half years.

“We had plans to marry and have children,” Guillory said after a press conference on Saturday. “Unfortunately we did not have any children.”

Guillory had worked the graveyard shift when she came home to find Alexander cooking breakfast.

“He was just so joyous,” Guillory said. “He was smiling and just so happy.”

A friend stopped by, asking Alexander to go fishing with him.

“I never thought to put up a fight about him going,” Guillory said. “He loved fishing. I thought I would just stay home and chill.”

Guillory’s sister had graduated the night before and the family planned a graduation dinner for Saturday so she understood he would not be gone long.

“We had fun and talked before he left,” Guillory said. “Right before he left, he would say “Give me a kiss, give me another kiss.” Then he would get halfway to the door and say it again. He did that several times.”

That was the last time Guillory saw him alive.

“An hour later, someone bust through the door as I was sleeping,” Guillory said with tears forming in her eyes.

She ran to the scene and recognized her blue flip-flops he was wearing when he left the house, but only saw Alexander from the ankle down.

“His sister grabbed me halfway there and was crying,” Guillory said. “I could see the EMT’s working on him as I screamed and tried to pass the yellow tape.”

Guillory tried to locate the friend Alexander left with for an explanation of what happened.

“There are unanswered questions,” Guillory said. “I lost the love of my life to a gun. The violence needs to stop. “

Guillory wants people to know there are other ways to solve differences.

“To know Elijah is to know how loving and caring he was and always smiling,” Guillory said. “He loved the outdoors and fishing but he did not care to be around a large crowd of people.”

“It is sad he is not able to tell his side of the story,” Guillory said. “I gave him the world and he gave me the world.”