Legally saying ‘I do’ 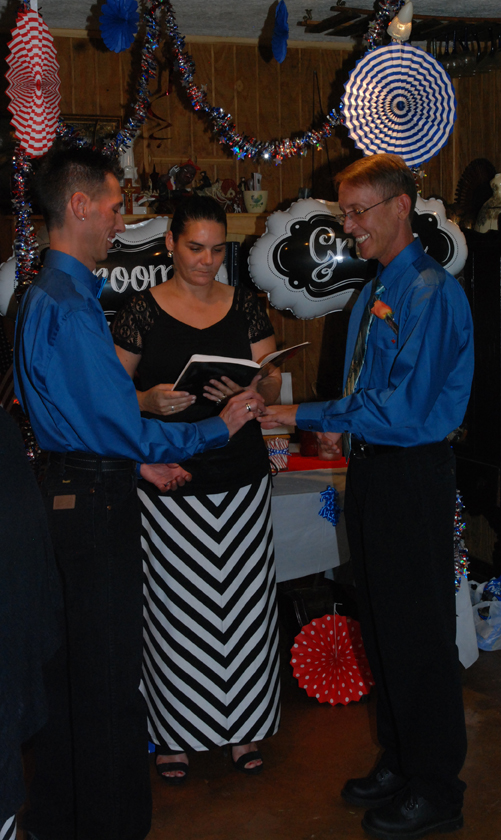 Dawn Burleigh/ The Orange Leader Michael S. Roberts, right, and William J. Miller were married Saturday after waiting over 16 years to be able to do so legally. Roberts and Miller were the first same-sex couple in Orange County to receive a marriage license.

When the announcement of the Supreme Courts ruling on same-sex marriages was announced on television, Michael S. Roberts, known as Shayne to his friends, woke his partner of 16 and a half years, William J. Miller, to give him the news it was legal for them to wed.

Miller is known as Wil to his friends and family.

“I asked him if he really wanted to because it was legal now,” Shayne said just moments before their wedding on Saturday.

The couple has worn wedding rings for the pervious 14 years, but those rings have new meaning as they officially, legally married during a small ceremony in their home surrounded by friends and family.

Shayne and Wil are the first same-sex couple to receive a marriage license in Orange County.

“We were reading the article in the paper and realized it was us,” Shayne said. “We did not know until then we were the first ones.”

After asking Wil’s father for his hand in marriage, Shayne proposed again on Facebook.

“We had talked about it before,” Wil said prior to the ceremony. “I am excited.”

Between Tuesday and Saturday morning, the two planned the wedding they had waited to have for years.

“The most difficult part was deciding who to invite,” Shayne said. “It was word of mouth.”

The easiest part of the planning was deciding who would perform the ceremony. Brandi Cornwell, a friend of Shayne’s for over 20 years, reminded the couple she was ordained as a minister December 22, 2014. Cornwell, originally from Port Arthur, now resides in Pecos, Texas.

“I jokingly told them I was ordained, and they asked if I would perform the ceremony,” Cornwell said. “I said it would be my honor for them to be my first marriage ceremony.”

Cornwell drove 12 hours to for the honor, something she said she would not have done for just anyone.

“Shayne and Wil are the true meaning of love,” Cornwell said. “They impress me daily with their love and commitment to one another.”

“I am very excited about the [Supreme Court] ruling,” Smith said. “Shayne and Wil so belong together, they are the perfect match for each other.”

“Shayne asked my husband for Wil’s hand in marriage on Monday,” Miller said. “Of course he said yes. They are so excited and ready for this. They are perfect together.”

Miller said she was excited when she heard of the wedding plans.

“I was gracious really when Shayne asked me,” Miller said. “It touched me. Wil is a part of the family. Could not ask for better.”