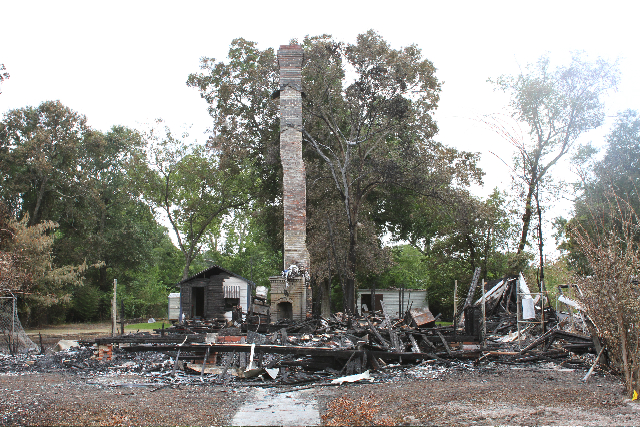 Only the chimney remains at the site of the Serenity House, which was destroyed by fire late Sunday night. This structure was one of three which were destroyed by fires in a 30 hour period in Orange over the Fourth of July weekend. (Tommy Mann Jr. / The Orange Leader)

ORANGE — A trio of fires over the Fourth of July holiday weekend have investigators seeking answers to many questions.

The Orange Fire Department battled three large, structure blazes over the course of 30 hours during the Fourth of July weekend and each fire has left investigators seeking answers.
“These fires all have one thing in common, and that’s the fact each structure was vacant,” said Chief David Frenzel of the Orange Fire Department. “And that makes all of these fires very suspicious.”
The first fire was reported at approximately 4:30 p.m., Saturday, July 4, in the city’s historic district as a vacant house on the corner of Sixth Street and Cypress was destroyed.
Then, at approximately 10 p.m., Sunday, July 5, another large blaze at a vacant house near the corner Eighth Street and Sholar Avenue in Orange was reported. When emergency personnel arrived, the house was already fully engulfed in flames.
Frenzel said a third fire was reported approximately 15 minutes later at the structure formerly known as the Serenity House, which is located on Park Avenue alongside the railroad tracks. This house was also unoccupied.
“Lightning may strike twice, but its probably not going to strike three times,” Frenzel added. “I just find it very strange that three unoccupied houses would catch fire. Besides being vacant, they were all unsecured as well.”
Frenzel said investigators with the Orange Fire Department and Orange Police Department are gathering information on each of these structure fires, including witness statements and footage from area surveillance cameras.
“Right now, we do not know if these houses had utility boxes connected still or not,” Frenzel continued. “But we aren’t going to let this go. Fortunately, there have been no injuries or deaths, and that’s a good thing.”