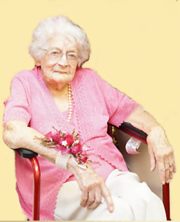 Lois Rogers McAnally had a dreamed of having a house on the highway with a yard of beautiful flowers while her sons wore bow ties.
McAnally, 100, has lived in the same house in Vinton, Louisiana for the last 80 years.
“She loves her flowers,” Sheila Cowan, granddaughter said. “Faith first, but she does love her flowers. She can grow anything. She can put a stick in a pot and it will grow.”
McAnally met her husband Lloyd during the Civilian Conservation Corps. She was instrumental in bring electricity and gas to the area.
Lloyd worked at Levingston Shipyard in Orange during the 1940’s.
McAnally would sit in the car with her children while her husband attended welding school.
McAnally is the oldest of five children.
She has six children, three living and 3 now passed, 12 grandchildren, 21 great-grandchildren, and five great-great-grandchildren.
The family celebrated her birthday early with a party on Saturday.
“She is a fantastic cook,” Cowan said. “She loves to cook and can.”
McAnally is a charter member of Crossroads Baptist Church in Vinton.