Fans travel to Austin in support of Mustangs 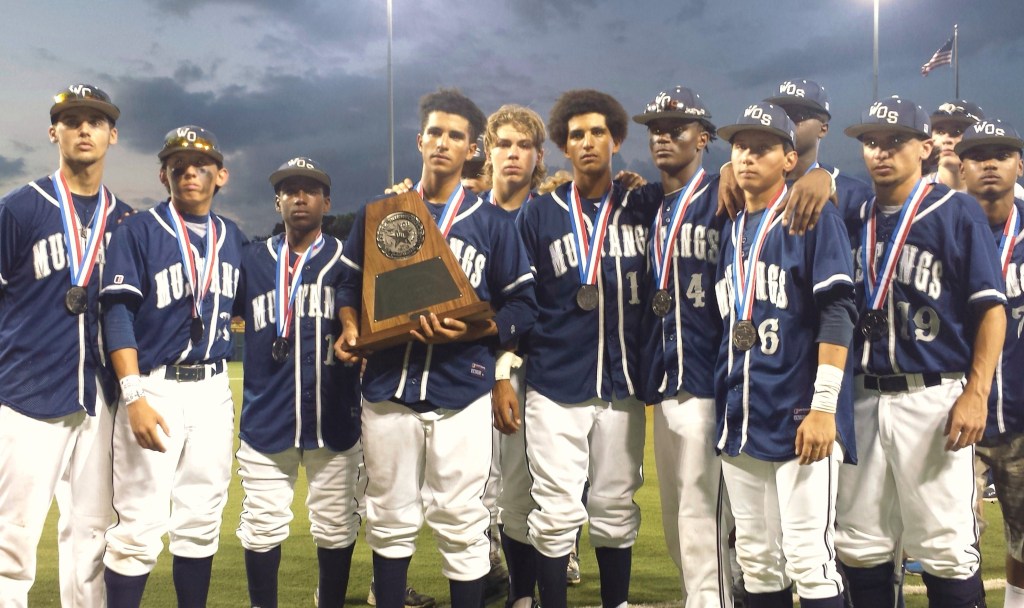 The West Orange-Stark Mustangs baseball team came up just short in its quest for the Class 4A State Championship on Thursday night (June 11, 2015), as the Argle Eagles defeated WO-S by a score of 7-3. The team is shown here holdings its State Finalist trophy and wearing medals. Congrats to the Mustangs on an amazing season and one which will always be remembered. (Tommy Mann Jr. / The Orange Leader)

AUSTIN — For the second time in just over six months, fans of the West Orange-Stark Mustangs packed their bags and headed to the State Championship game. It was just in a sport not usually met with such success.
The West Orange-Stark Mustangs baseball team traveled to Austin earlier this week to take part in the Class 4A baseball tournament for the state championship. Joining the team in Austin were hundreds of vocal and supportive family members, friends and fans as team sought to add its trophy case collection.
The Mustangs demolished the El Campo Ricebirds by a score of 8-0 on Wednesday in the semi-final match, but fell just short of a state title when a sixth inning rally stalled in a 7-3 loss to the Argyle Eagles on Thursday night at UFCU Disch-Falk Field at the University of Texas in Austin.
The team’s success on the field has proven to be an inspiration to those off the field as the support of the players grew each and every week of the season and playoffs.
The Mustangs are always a factor in the playoffs and a run at the state championship is almost always expected. It’s not unheard of for the basketball team and track team to find great success each year as well. Baseball, however, until this year, may have been an afterthought. Not any more.
Once the magic started unfolding during the playoffs, the belief in watching these players do great things continued to grow.
“A lot of people thought there was no way this team would get to the state championship,” said Nancy Dallas, a Mustang parent. “I did not think it initially, but as the playoffs continued I did not think it was an impossibility.
“These kids just kept through game after game,” she added. “We have had to count on so many players, not just ‘one through nine,’ but the extra players on the team too. It’s been such a remarkable year and we are so proud of them all.”
Loyal fans made the trip having faith the Mustangs would reach the title game, and the team did not disappoint. David Mouton has been a fan for many years, including when his sons played on the Mustangs baseball teams more a dozen years ago.
“Back in the day, West Orange-Stark had excellent baseball teams, but things kind of dropped off for a while,” Mouton said. “Building the program back up is the key, and Coach (Shea) Landry has done a great job.”
David Mouton and his wife, Patty, have been fans since the early 2000s. Their son Justin was the third baseman on one of the Mustangs playoff baseball teams at that time and they continue to follow the team many years later.
“This team has been great,” Mouton continued. “The season started well, but then they went 1-3 in district and that was scary. Seeing them come back from that and make the playoffs has been great. Now to have them here in Austin and playing for the state title is just amazing. That’s why I’m here and so is everyone else.”