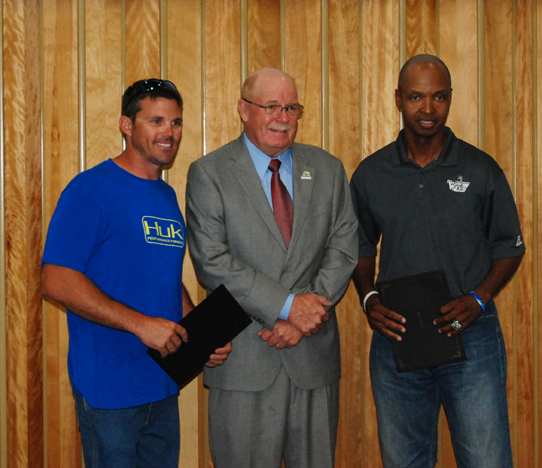 Jonathon Simon, left, and Russell Bottley, right, accept a proclamation from City of Orange Mayor Jimmy Sims in recognition of the assistance they provided during a recent boating accident. (Dawn Burleigh/The Orange Leader)

One month ago, ten individuals selflessly began a rescue operation after witnessing two boats collide, ejecting the severely injured occupants on May 5, 2015.
Orange City Council gave a proclamation for  Russell Bottley, Jonathon Simon, Jesse Burrell, Jr., Kevin Vaughan, Stephen Vaughan, Cade Reeves, John Trahan, Steve Henson, Wesley Dishon, and Drake Dishon for placing their safety above others as they rescued the victims and administered first aid.
“I am not a hero,” Russell Bottley said during the Tuesday morning council meeting. “God had me at the right place at the right time. I had not planned to fish that day.”
The incident happened during the Simon’s Outfitters fishing tournament held weekly from the first Tuesday of April until the last Tuesday of July.
“This is an event that bring people from Orange,” Jonathon Simon said. “It’s a lot of fun. The Bassmaster event helped stock our rivers and we see it. The event is for fun.”
This is the fourth year of the tournament.