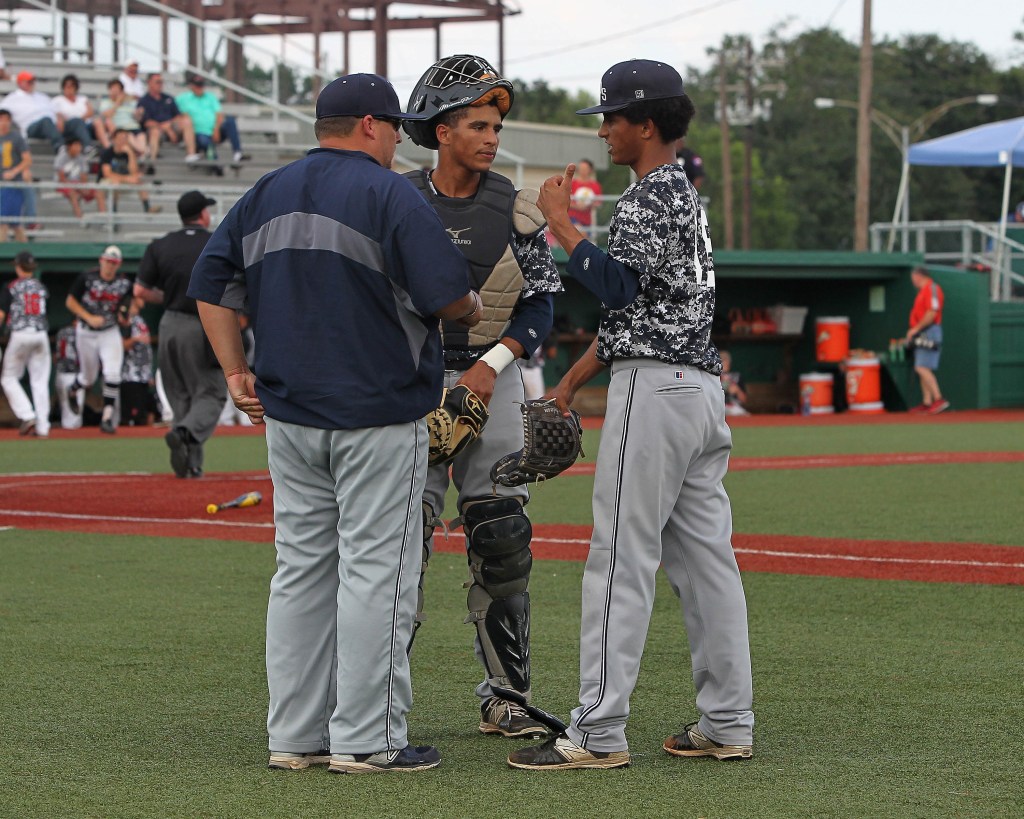 WO_S assistant coach Stephen Westbrook chats it up with catcher Grant Anderson and pitcher Aidan Anderson during Game Two of the Huffman series.

AUSTIN — After an amazing run throughout the playoffs, the Class 4A Region III champion West Orange-Stark Mustangs will be seeking the ultimate prize today and Thursday as they find themselves just two wins away from a Class 4A state baseball title.
“We know our kids will go out there and represent WO-S well, they are such a class group and they’ve shown that all year,” said Mustang head coach Shea Landry. “They are so pumped up to put on that Mustang uniform and becoming the first Mustang team to get to State since 1991.”
The Mustangs (26-10) will take on the El Campo Ricebirds (29-5) today at 4 p.m. in the Class 4A State Semifinals at the University of Texas’ Disch-Faulk Field.
The other semifinal will pit Abilene Wylie (28-5) against Argyle (28-7). The 4A State Championship Game is Thursday at 6:30 p.m.
“One thing for sure, all four teams are very talented, you have to be to reach this level,” said Landry. “El Campo and Abilene, there is a whole lot of tradition there with those two programs and you know Argyle has to be pretty good too to reach this point. Our kids, they feel like they can compete with anybody, they’ve proved that a lot the last few weeks.”
This will be the Mustangs’ first appearance in the State Tournament since 1991. WO-S fell to West Mesquite 8-7 in the Class 4A semifinals.
The Mustangs are still riding high after dropping three straight Game Ones in the last three rounds to come back to take Game Two and Game Three victories, including stunning No. 2-ranked Huffman to win the Region III Finals.
“We have a group that stays confident, we’ve been that throughout the playoffs,” said Landry. “The kids have a unique ability to refocus after tough games and when we play focused baseball we are a tough team to beat because we usually improve as big games move along.”
El Campo is the champion from District 27-4A and went 9-1 in winning its district.
The Ricebirds defeated Hidalgo 5-3 in the Region IV Finals last week.
El Campo breezed past Columbia 13-3 and 10-7 in the bidistrict round. They defeated Wimberley 8-3 and 6-3 in the area round. They nipped Sweeny in a tough three-game set 3-0, 0-5 and 5-3 and edged Sinton 1-0 and 5-4 in the regional semifinals.
“Looking at their numbers, El Campo really hits the ball well,” said Landry. “Looks like they run well when they get on like we do. Their pitching staff looks solid. They’ve been in some tight situations in the playoffs and have been in some close ones. It looks like they showed a lot of character in those playoff wins against Sweeny and Sinton because those two schools are known for playing excellent baseball.”
The Ricebirds have certainly been able to put the bat on the ball this season.
Clayton Harp has provided the biggest pop, batting .430 with 41 runs batted in.
Andrew Saucedo his hitting at a .529 clip with 28 RBI. Brock Brandi hits .449 with 19 RBI followed by Chad Quinn (.447, 21 RBI), Blaine Fuechere (.429, 21 RBi), Clint Krupa (.400, 12 RBI), Brylan Crivellari (.354, 18 RBI), Riley Stock (.353, 23 RBi), and Ridge Whitley (.333, 22 RBI).
The Ricebirds are led on the mound by Collin Quinn (5-0, 2.43 ERA), Crivellari (5-1, 2.62 ERA), Clayton Harp (4-0, 2.56 ERA) and Tayton Priesmeyer (3-1, 2.70 ERA).
Grant Anderson leads the Mustangs at the plate, hitting .377 with five home runs and 31 RBI. Payton Robertson is batting .372 with 28 runs scored. Leadoff man Grant LaPoint-Teate has scored 32 runs and hits .339. Jack Dallas chimes in with a .367 average and 20 RBI.
Aidan Anderson owns a 9-3 record with a 1.70 ERA on the hill. Grant Anderson is 7-5 with a 2.04 ERA while Dallas is 5-0 with a 1.21 ERA.
Landry wants to see the Mustangs continue this great ride they are on.
“This is a trip that the kids will remember for the rest of their lives,” said Landry. “We’re all about being about business but we also want them to have fun and be loose too. They really earned it to be where they’re at. It’s a really great spot to be in, not only for the kids and the coaches but for our community. Hopefully we can get a ton of support at the Disch.”
Tickets for the State Tournament have to be purchased at the gate. Adult tickets are $10.00 per session, students and children (2 years and older) are $5.00 per session, All-Tournament tickets are $30.00. The State Championship Game is Thursday, June 11th at 6:30pm.
UFCU Disch-Falk Field is located on the corner of Martin Luther King Blvd. and Comal Street at 1300 E. MLK Blvd., Austin TX 78722. View directions and parking information on the UFCU Disch-Falk Field website.