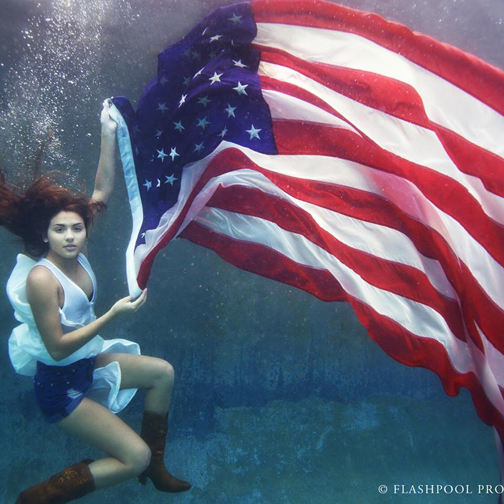 AUSTIN, Texas — When Andrea Hightower, 17, the current crowned Miss Mississippi Teen USA, decided to overcome a lifelong fear of drowning, she chose to make it an art project. To that end, she contacted Flashpool Productions, an Austin, Texas-based underwater photography agency, to document the entire process.
“It was really an exciting process,” Hightower said. “While I’ve always liked swimming, there’s always been a constant nagging fear of drowning that has kept me from truly being able to love the experience. Having Sarah there to guide me through the process made that fear just go away!”
Hightower is the daughter of Orange County Human Resource Director Minnie Hightower of Vidor.
Sarah Teveldal, Flashpool Productions’ principal photographer, met up with Andrea Hightower in May to discuss the process of becoming an underwater photographer. Together, they came up with three different concepts: waving the American flag, dancing in a ball gown, and outfitted in a silicone mermaid tail. Each of these concepts offered interesting challenges for both Teveldal and Hightower. “Water can really do fabric a lot of justice,” Teveldal said. “The weightlessness allows it to move and flow in such a graceful manner that cannot be achieved above water. Colors appear bolder and more vivid and reflections on the surface create eye-appealing images that are almost dreamlike.”
Underwater modeling is generally considered to be most specialized and difficult forms of modeling, resulting in few people ever attempting it. Fortunately, Hightower, as a reigning Miss Mississippi Teen USA has had plenty of practice in front of the camera, which helped her through the sometimes difficult learning curve.
“I have a new-found respect for underwater models!” Hightower said. “You have to focus on so many things: holding your breath, smiling, making sure your props and clothing are right while maintaining your pose and position! There is a tremendous amount of work that goes into just a few seconds for the perfect shot. Far more than usual lighting and makeup I’m used to!”
Andrea Hightower is the current reigning Miss Mississippi Teen USA, and is currently preparing to be competing on a national level. Her main goals during her reign are to bring awareness to the health concerns of people suffering with mental illness and to promote the Miss Universe Organization’s mission of helping young girls be confidently beautiful.