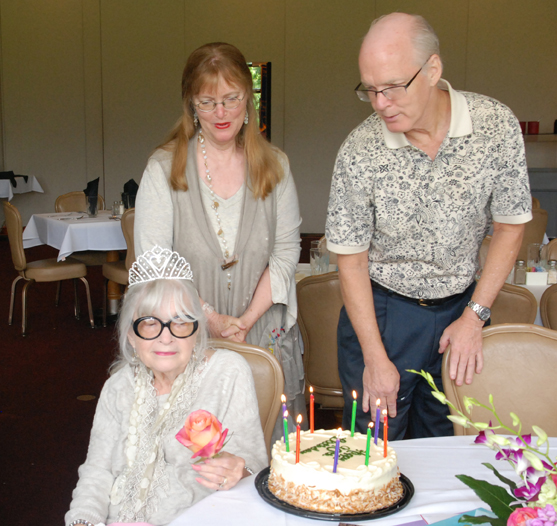 Special to The Leader
Billie Wood celebrated her 90th birthday on Tuesday at the Sunset Grove Country Club with friends and family.
Billie Ann Moore was born in Greensboro, NC on June 9, 1925.  She graduated from Jamestown High School in Jamestown, NC in 1943 before taking a job with Jefferson Pilot Insurance Company for a few months before becoming a Civil Servant in 1944, working for the War Department Army Ordinances Division in Greensboro which oversaw Wysong & Miles Co. (Greensboro), manufacturer of bomb fuses for the U.S. Army Air Corp in WWII.
Billie then moved to the Overseas Replacement Depot (ORD) in Greensboro where she processed paperwork for military replacements headed to Europe in the period immediately following WWII. Here she met and married 1st Lieutenant Robert M. Wood who also worked for ORD.  The Greensboro ORD operation moved to Camp Kilmer in New Jersey in 1946 and Lt. Wood received orders to join them at their new location and took his new bride with him.
Robert left military service in 1947 and moved to Orange where he worked for E.I. DuPont, Inc.  Billie worked for the War Assets Department at the U.S. Naval Base in Orange processing paperwork to liquidate the base assets prior to its closing.
Billie and Robert had two children Bobbie, born 1949, and Roger, born 1951.  Robert passed away in 2004 and is buried at Arlington National Cemetery.  Billie still resides in Orange and will  be 90 years old in June.
She has been an active member of the Orange United Methodist Church since 1950 and is still active playing bridge, gardening and shopping.