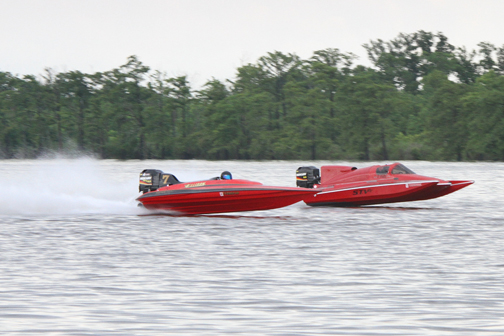 Hundreds of area residents turned out this past Saturday and Sunday for the second annual “Shootout on the Sabine” boat races at the City of Orange Boat Ramp to watch boats soar across the water in exciting racing action. (Tommy Mann Jr. / The Orange Leader)

ORANGE — Even Mother Nature’s uncooperative attitude on Saturday afternoon could not dampen the excitement for the “Shootout on the Sabine.”

A heavy downpour and lightning may have provided a brief delay during races on Saturday afternoon, but hundreds of area residents turned out this past Saturday and Sunday to witness the high speed racing action at the second annual “Shootout on the Sabine” boat races at the City of Orange Boat Ramp, located just off Simmons Drive.
“We had a pretty good turnout on Saturday, despite the weather and all of the graduations going on during the course of the weekend,” said Ashley Mahana, coordinator of the Orange Convention and Visitors Bureau. “Both of those impacted the day some, but not nearly as much as we thought it might.”
With the event scheduled the final weekend of May for the past two years, Mahana said the CVB is considering some changes to the event if possible.
“The attendance was pretty good overall,” she explained. “But with so much going at this time of year, locally, we may consider seeing if we can move the event back a week to accommodate our community. It’s something we will have to discuss but it has been brought up.”
Success is measured in more than attendance. Although no official estimates are available, a sure sign of high attendance and a successful event is a satisfactory report from vendors.
“All of our vendors said they did well over the weekend,” Mahana added. “And that’s good to hear. We want to keep them happy, and keep DSRA happy, because we want to keep this event here every year.”
Kennedy Miller of Beaumont attended Saturday’s races with some of his friends.
“This is my first time to see any boat racing event, and I really liked it,” Miller said. “I expected the boats to race around in a circle or course or something, but this was different. I liked the drag racing-style action with the boats side-by-side. Even with the rain and the delay, it was still a lot of fun.”
The only negative aspect of the weekend was the less than favorable weather on Saturday afternoon. Organizers knew the weather was in the forecast and opted to cancel the Kree Harrison concert 30 hours in advance, which turned out to be the correct decision.
“The bad weather hit right at the time the crew would have been trying to set-up the stage and sound equipment for the concert,” Mahana added. “It would have impacted soundcheck and left the grounds soaked. We hated to cancel, but we knew we had to do it. We are hoping to reschedule the concert at a later time.”