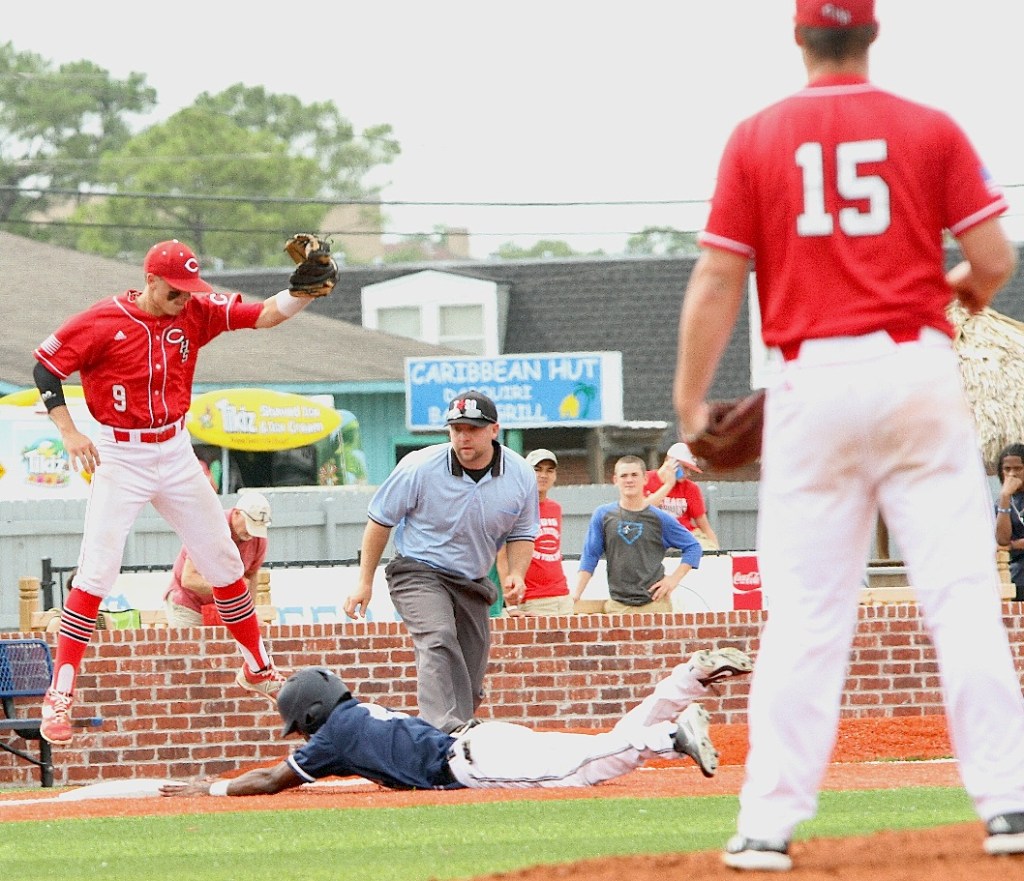 WO-S' Kalen Garrett (4) slides in safely at third base against Carthage last Saturday at McNeese State. By Tommy Mann, Jr.

WEST ORANGE — It all comes down to stepping up at the plate and on the mound for the West Orange-Stark Mustangs to reach the Class 4A State Tournament.
There is no question that the Mustangs have gotten just that done in what has been an amazing run throughout the playoffs.
With their backs against the wall the last two weeks after dropping Game Ones to both Bellville and Carthage, the Mustangs rallied together and punched both of those teams in the mouth to Game Twos and Threes.
Now, just the very talented Huffman Falcons stand in the way of the Mustangs with a trip to the State Tournament on the line in a best-of-three Region III Finals series at Lamar University tonight and Thursday. It’s WO-S’ first Regional Finals appearance since 1991.
Game One between the Mustangs (24-9) and the District 23-3A champion Falcons (25-4) will be at 7 p.m. Wednesday at Vincent-Beck Stadium. Game Two is slated for 5 p.m. Thursday with Game Three, if necessary, to start 30 minutes after Game Two.
“Huffman has a had a great run over the last several years and they’ve been pretty much ranked No. 2 in the state all year,” said Mustang coach Shea Landry. “They do everything so sound. They’re fundamentally strong in all areas of the game. They simply don’t make mistakes that often. We’re going to have to match that and the kids are excited about it.”
Landry has been impressed with the character the Mustangs have shown all season, especially throughout the playoffs.
“Nothing seems to phase our kids, they know how to bounce back and shake off some adversity,” said Landry. “To drop the first games in the last two rounds and to come back and play with the effort and heart they’ve shown is truly amazing. It’s so fun to coach this group and hopefully we can keep this going.”
The Mustangs have played 10 playoff games thus far, outscoring opponents 56-25. The Falcons have just played six playoff tilts and have outscored the opposition 40-10. They were tested pretty well by 24-4A champion Bridge City as the Falcons squeezed out a 3-2 eight-inning win over the Cardinals in the regional quarterfinals.
Huffman took down Center in Game One with a tight 3-1 win before rolling to a 13-4 win in Game Two.
The Falcons defeated Hardin-Jefferson 5-0 in bidistrict and toppled Caldwell 9-3 and 7-0 in the area round.
“Huffman has defeated some quality teams in the playoffs and we feel like we have too,” said Landry. “The team that makes the most plays with the bat, keeps the errors down and gets good pitching will be the team that moves on. That sounds cliché but it’s true.”
Huffman is led by left-handed ace pitcher Matthew Bumpas along with fellow pitcher Jake Harrison.
Bumpas has been in his share of big games on the hill the last three seasons.
“Bumpas has great control of his pitches and he throws for a lot of strikes,” said Landry. “We have not seen many lefties this year, the kid from Splendora and the (Aaron) Edlemon kid for Hardin-Jefferson. The Harrison kid has a good arm. We know we have a deep pitching staff and Huffman does too so that should make it an interesting series.”
Bumpas hits the ball well along with teammates Cody Gaitin, Dylan Lorfing, Richard Marches, Cody Stone and James Tutor.
Landry and the Mustangs are hoping for another big crowd at Vincent-Beck. The Mustang crowds have been excellent throughout the playoffs, especially the last two series with Bellville and Carthage. Plus, Huffman’s crowd could be split in some ways with their girls playing in the Class 4A State Softball Tournament this week.
“Our crowds have been tremendous, “said Landry. “They’ve been so vocal, especially the last couple weeks. Even after we dropped those first games, our kids really fed off the crowd because they stayed so loud and confident and that gave the kids a lot of confidence.”
Six other squads will be duking it out this week for the right to go to State. In Region I, Abilene Wylie will face Venus. In Region II, Pleasant Grove will be pitted against Argyle and in Region IV, it will be El Campo vs. Hidalgo.
The Class 4A State Tournament will be held next Wednesday and Thursday at the University of Texas’ Disch-Faulk Field in Austin. The semifinals are set for June 10 at 1 p.m. and 4 p.m. and the state title game will be at 6:30 p.m. June 11.