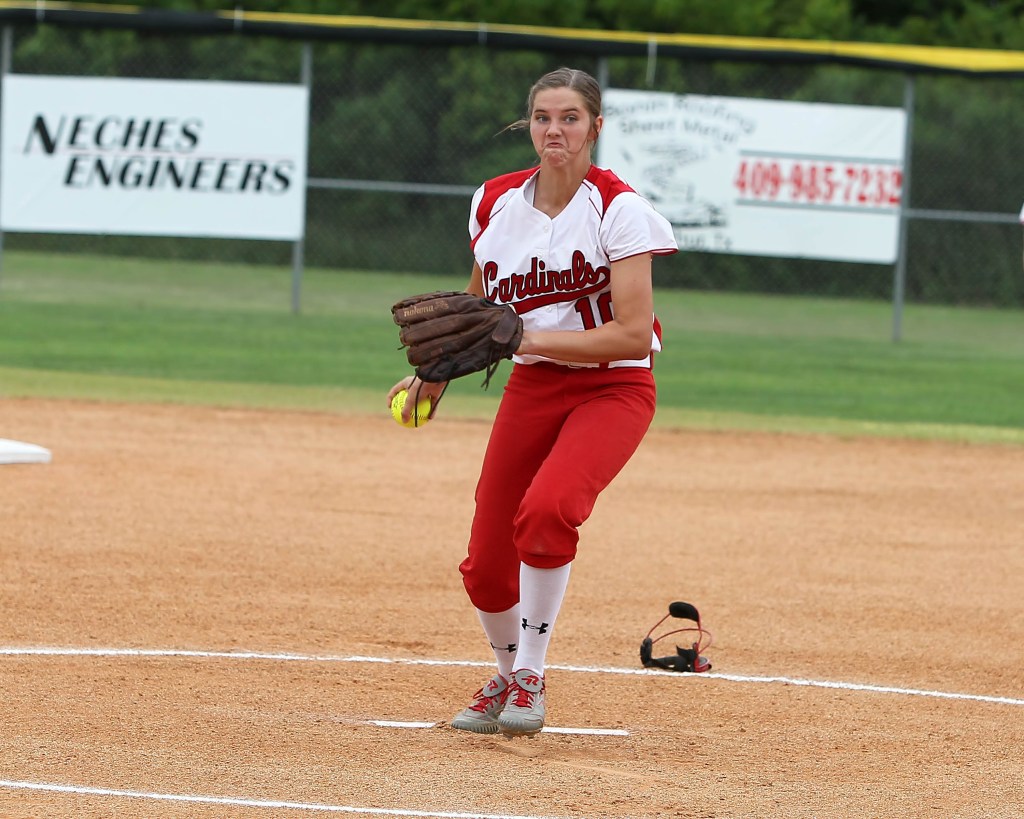 Bridge City's Kassidy Wilbur is the 2015 MVP of the All-Orange Leader Team.

It was a banner year once again for local District 24-4A softball teams as three squads found themselves in the playoffs yet again.
The Bridge City Lady Cardinals ruled the roost in District 24-4A play as Coach Miste Henderson led the Lady Cardinals into the postseason yet again, this time as 24-4A champions.
The Lady Cardinals dominated 24-4A play with a 11-1 record and were just as strong in the playoffs, going three rounds deep and advancing to the Class 4A Region III quarterfinals before flaling in a grueling three-game set against Huffman.
The Orangefield Lady Bobcats, led by long-time coach Amy McLaughlin, punched their ticket to the playoffs again by finishing third in 24-4A play behind a solid group of seniors. The Lady Bobcats advanced to the bidistrict round where they fell to Splendora.
Coach Dena Adkins’ Little Cypress-Mauriceville Lady Bears went through a youth movement, especially in their pitching staff. However, the Lady Bears kept their composure and got themselves in the playoffs before falling to a Huffman team that is playing for the right to go to State this weekend against No. 1 La Grange.
It’s always hard, this time of year, to pick superlatives because so many or deserving but several kids stood out for our 2015 All-Orange Leader Softball Team.
When you think of Bridge City’s Kassidy Wilbur, Newcomer of the Year might fit the bill but not for this ninth grader. Wilbur dominated opponents with her true grit on the mound as she battled several senior-oriented teams at the plate and got the best of them almost each time she stepped to the plate. Considering she also led the Lady Cardinals with her bat, she was named 24-4A’s Offensive Player of the Year. She also gets The Orange Leader Most Valuable Player as well for her outstanding season.
Offensive MVP honors go out to Bridge City’s Hannah Carpenter, who picked up steam this year, especially in 24-4A play in which she came up with a slew of crucial hits.
Defensive MVP honors go out to Lady Cardinal catcher Kasey Frederick, who had a golden arm behind the plate and helped out the young Wilbur figure out pitches.
So without further ado, here is the entire All-Orange Leader 2015 Softball Team:
MOST VALUABLE PLAYER: Kassidy Wilbur, Bridge City
OFFENSIVE MVP: Hannah Carpenter, Bridge City
DEFENSIVE MVP: Kaleigh Carter, Bridge City
COACH OF THE YEAR: Miste Henderson, Bridge City
FIRST TEAM
Kasey Frederick, Bridge City
Katelyn Dickerson, Orangefield
Ashton Gautreaux, Orangefield
Alisha Fuss, LC-M
Mar’laysia Davis, WO-S
Baili Thibodaux, Bridge City
Mikaela Stegall, LC-M
Blythe Ferguson, LC-M
Kellyn Cormier, Bridge City
SECOND TEAM
Gabby Kespelher,Orangefield
Kaylee Ancelot, Orangefield
Angel Villanueva, LC-M
Aaliyah Teel, WO-S
Faith Kaufman, Bridge City
Skylar Kahla, Bridge City
Haley Fontenot, Orangefield
Chelsy White, LC-M
Kylie Bradley, Orangefield 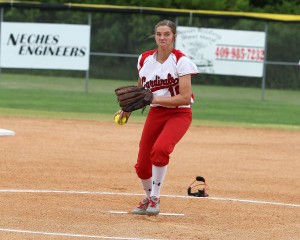 Bridge City’s Kassidy Wilbur is the 2015 MVP of the All-Orange Leader Team.