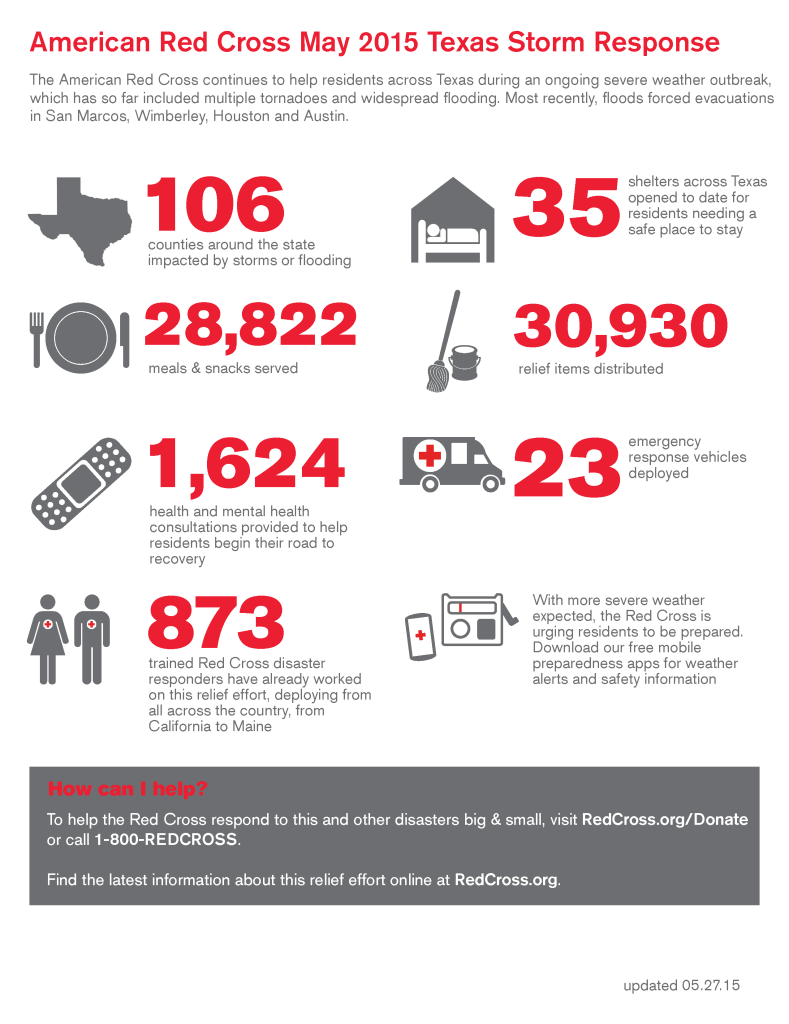 WASHINGTON — Texas and Oklahoma are feeling the devastating effects of weeks of heavy rain, tornadoes and flooding and the American Red Cross is there, helping people in the Lone Star State get back on their feet.
The storms have impacted about 35 percent of the state, destroying or damaging thousands of homes. The Red Cross is providing shelter, food, water, relief supplies, health services and emotional support to people in need.
More than 220 people spent their Memorial Day in Red Cross shelters in the two states. Governors in both states declared disasters in more than 80 counties after the extreme weather destroyed or damaged thousands of homes and left thousands without power. Schools are closed in several major metropolitan areas and people are being asked to avoid flooded areas.
“This deadly flooding comes on the heels of three consecutive weeks of severe weather in Texas. Some people have been hit repeatedly and we are assisting them for the second time,” said Richard Reed, senior vice president for Disaster Cycle Services of the American Red Cross.
Since early May, Red Cross workers have opened 30 shelters, served more than 23,000 meals and snacks, handed out 31,000 relief items and cleaning supplies. Nearly 700 Red Crossers are helping in Texas along with 22 emergency response vehicles. Additional volunteers and vehicles are on alert if needed.
American Red Cross of Southeast and Deep East Texas is readying shelters in the chapter area beginning with one in Tyler County and potentially Jasper and Newton Counties due to flooding or anticipated flooding.
The Orange office is part of the American Red Cross of Southeast and Deep East Texas chapter area.
Since early May, hundreds of Red Cross workers have opened 37 shelters, served more than 34,000 meals and snacks and handed out more than 33,000 relief items and cleaning supplies in Texas. In addition, 40 emergency response vehicles are distributing food and relief items in the affected communities and additional volunteers and vehicles are on alert if needed.
“The Red Cross is expanding our relief efforts and mobilizing additional volunteers, vehicles, food and relief supplies to help the thousands of people impacted by these latest storms,” continued Reed. “We depend on financial donations to provide shelter and food, and we need the public’s help now. Our response in Texas alone is expected to cost more than $3 million.”
Texas has been under the gun of a powerful storm system since early May, suffering repeated and ongoing severe weather and torrential rains. The situation worsened over the holiday weekend as more flooding hit the state, including parts of major cities such as Houston, Austin, San Antonio and Wichita Falls.
The Red Cross has been helping people in parts of Oklahoma since tornadoes hit the state in early May. Over the weekend residents were hit with heavy rain, more tornadoes and flooding. The Red Cross opened shelters and workers are providing meals and snacks and cleaning items to those affected. Additional flooding is predicted over the next several days and the Red Cross is monitoring the situation and working with local and state officials to determine what additional help may be needed.
A donation to Red Cross Disaster Relief can help provide shelter for someone who has had to leave their home and food and water for them to eat. Help people affected by disasters like floods, tornadoes and countless other crises by making a gift to Red Cross Disaster Relief. Your gift enables the Red Cross to prepare for, respond to and help people recover from disasters big and small. To donate, people can visit www.redcross.org, call 1-800-RED CROSS (1-800-733-2767) or text REDCROSS to 90999 to make a $10 donation.