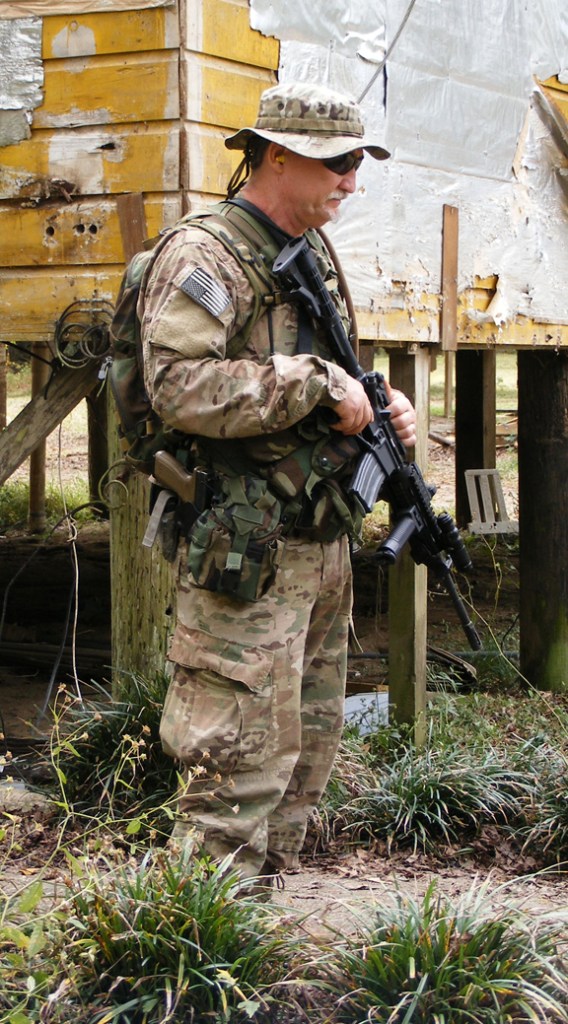 Golden Triangle Militia Commander David W. Smith is seen during a training session at an undisclosed location. A resolution recognizing the group was tabled by the orange County Commissioners Court on Monday. (Dawn Burleigh/The Orange Leader)

Orange County Commissioners Court tabled a resolution on Monday recognizing and supporting the Golden Triangle Militia as a reserve militia.
Commissioner Pct. 3 John Banken said he needed more information concerning the group before he could vote on the resolution.
Commissioner Pct. 4 Jody Crump said he was concerned about the selection of who can become members of the group.
“A year and a half ago, Banken said he supported the militia,” Golden Triangle Militia Commander David W. Smith said during the citizen comment portion of the meeting. “I brought information to you and Commissioner Burton brought it to Austin. This is about recognizing the code, not activating the militia.”
According to Texas Government Code 431.072  COUNTY EMERGENCY BOARD, the county emergency board of each county consists of the county judge, sheriff, and tax assessor-collector.  If one of those officers is unable to act, the governor shall designate another public official to serve on the board.
While SUBCHAPTER E. RESERVE MILITIA § 431.071. MILITARY DUTY.  (a) The reserve militia is not subject to active military duty, except that the governor may call into service the portion of the reserve militia needed for the period required in case of war, insurrection, invasion or
prevention of invasion, suppression of riot, tumult, or breach of peace or to aid civil officers to execute law or serve process.
(b)  The governor may assign members of the reserve militia who are called into service to existing organizations of the state military forces or organize them as circumstances require.
County Judge Stephen Brint Carlton said the resolution, as it is worded, recognizes the group exists. It also recognizes the offer to assist the county at the group’s own expense with no reimbursement from FEMA, the state or the county.
“They could be used for clearing debris or moving things around if needed,” Carlton said. “The Sheriff is the only one who can deputize a citizen. I am not in the law enforcement business, I will leave that to the Sheriff.”
David W. Smith said with or without the resolution, the judge or sheriff could activate the reserve militia.
Approving the resolution would have set a precedence in the state as it would have been the first such resolution to be passed by a county court.
The statue has been effective since September 1, 1987.
Golden Triangle Militia members said after the meeting, they hoped the resolution would help citizen see the group as a legitimate organization.
“We need citizens to be trained in the proper way to handle a situation,” one female member said. “We do not need lone wolves running around. That is how people get hurt.”