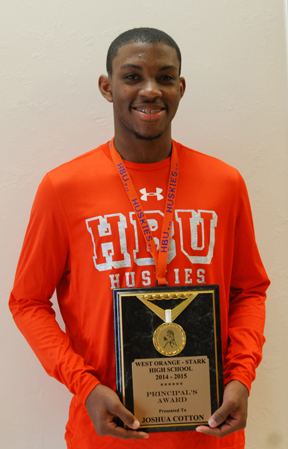 Joshua Cotton, a senior at West Orange Stark High School, received an unexpected surprise last week when his name was called as a recipient of the Principal’s Award.
Cotton, who also has been awarded a scholarship for Houston Baptist University (HBU) and received the Marine’s Outstanding Academic Achievement Award, works part time at Kroger’s when he is not studying.
“I always told him to get a scholarship in sports or academics,” Kelvin Cotton, Joshua’s father said. “He has worked hard for this and deserves it.”
Both of his parents said Joshua is a good son who is respectful and has integrity.
Rod Anderson, principal of West Orange Stark High School, said a student is selected for the award who has had no disciplinary problems, good grades, attendance and good citizenship.
The award is usually given to one student each year, but Anderson said he has given out two before such as this year.
“Joshua is a great student that a principal can appreciate,” Anderson said. “He is a team player and I have enjoyed having him here for four years.”
Cotton plans to play basket ball at HBU as a walk on. He will major in Business Management.
Cotton will also be one of the students honored at the Greater Orange Area Chamber of Commerce Student Luncheon on Thursday.