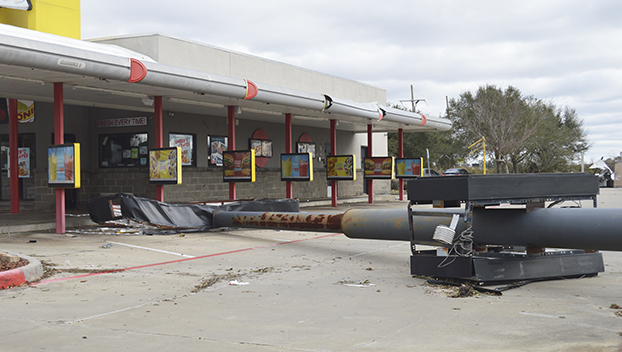 A tall pole at Sonic Drive-in on Texas 62 in Orange fell during the storm. (Mary Meaux/The Leader)

As of 3 p.m. Wednesday, Entergy Texas said more than 12,000 Orange network customers were without power.

The estimated restoration time for the that full group is 10 p.m. Thursday.

More than 700 workers are in Southeast Texas assisting with restoration efforts, with most of the crews focused on the hardest hit areas in the Orange network.

Orange County remains the most heavily impacted area. Critical transmission infrastructure and 11 substations were damaged by the storms. Currently, four substations have been restored.

This equipment is critical as it carries power into the area.

Entergy Texas expects to restore power to customers in Beaumont, Port Arthur and Winnie networks by the end of day Wednesday.

Most Orange County customers are expected to be restored Wednesday except the hardest hit areas due to the severity of equipment damage.