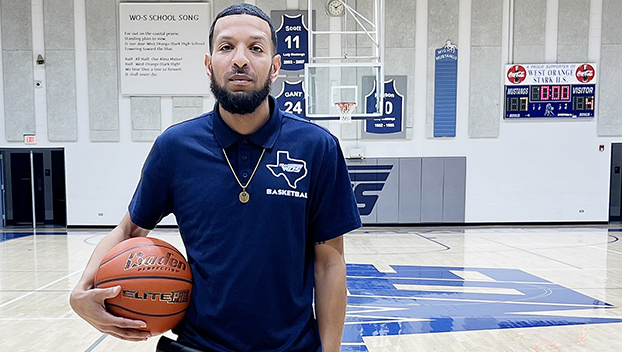 Mustangs second-year head coach Chris Castille is determined to top the challenges on the way to building a successful program. (Keagan Smith/Special to The Leader)

The West Orange-Stark Mustangs may be in the midst of a 1-18 season, but hope for the future remains intact despite the record.

Chris Castille, the Mustangs’ second-year head coach, understands what it will take to lift his team out of last place in the district standings to the next level.

“We have a culture of no excuses,” Castille said. “I’m not gonna make any excuses for why we aren’t winning, and the team isn’t gonna make excuses. All we’ve got to do is get back in the lab and keep working, put our head down and not worry about the outside noise.”

With only one player returning from last season’s playoff roster, Castille knew it was going to be a rebuilding year. Adjusting to a nearly all-new lineup can be difficult, especially with four upperclassmen among the nine players on varsity.

West Orange-Stark’s youth movement brings a package deal of pros and cons. On one hand, younger players tend to experience growing pains as they get comfortable playing at the varsity level.

It can take a while for a team to really gel, but Castille is comfortable with that.

“Being so young, we’ve gotta get more chemistry playing with each other,” Castille said. “Once they get that chemistry, they have to learn how to win. But when they do, we’re gonna start taking that next leap.”

As the team chemistry continues to develop with each game, some individuals on the team are already starting to show signs they can be key contributors for the future.

“My freshman (DD Davis) started off the year playing six minutes,” Castille said. “Now he’s getting 20 minutes. In the last five district games, he’s averaging 17.5 points a game. My other guards, two juniors and a sophomore, are showing that they’ve got the potential to be really good on varsity.

“We’re going to be developing on a freshman and JV level, too, and the future is really bright if everybody keeps their head down and keeps focus on the work.”

The Mustangs coaching staff is intent on maximizing the talent that’s available. Castille said his first philosophy as a coach is that he can’t fuss at what he didn’t teach.

Because of that, he makes sure to teach his players in parts by explaining his expectations, walking them through drills and demonstrating the skills he wants his players to emulate.

After all, patience and repetition are part of the rebuilding journey.

The hope is fans and alumni stick around throughout the process. The Mustangs community is accustomed to winning, especially with a multi-decade run as a football powerhouse under their belts.

However, the lesson to be learned is programs are built over time, as even the historic football team had humble beginnings. At the end of the day, it’s possible for schools to excel and keep fans interested in multiple sports, too.

“I look at schools like Duncanville that have a state championship in football and a state championship in basketball,” Castille said. “When you know you have athletes like that, it’s no problem being the little brother because you know you’ll still get those guys. We’re just trying to give everybody that same feeling they have in both football and basketball. We want that same excitement.”

Keeping the team’s morale up is admittedly tough when you’ve only won one game all season. With that in mind, Castille said keeping a positive energy is crucial because when he’s got his head held high, his players tend to follow suit.

“I really believe I have some of the toughest kids in the district,” he added. “They don’t let anything phase them. The losing doesn’t phase them, and they still have a mindset that we can go back and beat any team in our district. They really believe that, and that’s what I love about this group. That’s why I call them my little wolf pack – they hunt together. One person goes, they all go.”

Establishing that toughness is a key part of turning a rebuilding program into a real winner, but there’s more to coaching than just the wins and losses. Castille knows leading his team and being a mentor is bigger than the game he coaches.

“I try to make it a brotherhood if you play in our program,” he said. “You can always come back. You can always call me, and we’ll help you out. Or you can come help us out. It’s not just about basketball. I feel like every kid 20 years from now will still be able to contact me, and we’ll have a connection.”