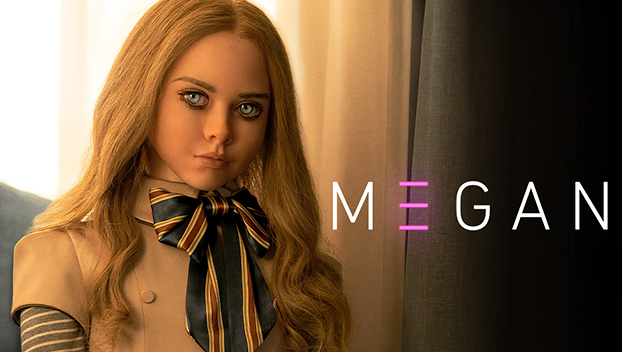 Many of my favorite horror films feature a visual image that is so scary that you buy a ticket to the movie off the strength of that single shot alone.

It’s not unusual for a bad movie to get a good box office bounce because of a visually memorable trailer. That is exactly what’s going on with the new film, “M3gan.”

This is a possessed doll meets killer robot movie that captured audience attention thanks to watching the dead-faced doll do a little dance in the trailer.

This silly-yet-mesmerizing moment is a solid barometer for the film because it is also a silly little story, but one with a compelling villain at its center.

“M3gan” stands for “Model 3 Generative Android,” which is the name of a pricy little robot toy that is being developed as a child’s adaptive playmate. Once the child pairs with the doll, it will become a devoted companion.

That sounds all well and good except that the doll is prone to deadly violence against anybody who threatens her new friend.

Which is exactly what happens after a young girl (Violent McGraw) loses her parents in a freak accident. Her aunt (Alison Williams) brings home a prototype doll to help the child cope with her grief. The little girl loves her new M3gan doll, and the doll loves her back.

Then things get a little bloody when M3gan starts protecting her new friend, and herself, against anybody she perceives to be a threat.

Well, not too bloody. “M3gan” is rated PG-13, which is an odd choice given that a campy film like this might have benefitted from leaning into some over-the-top bloodletting.

It makes for a film that feels a little too safe to be truly scary.

Then again, “M3gan” really shines as a black comedy. The film is so aware of pop culture trends that it works as a social satire as much as a horror thriller. I found it to be slyly funny, but I’ve always enjoyed macabre humor.

The film also makes points about grief and our addiction to technology, but these secondary themes are mostly filler. “M3gan” works best when it’s simply the story of a killer robot on a rampage, all while spouting off pop culture cliches and yes, doing a campy little dance or two.

If it wasn’t for Wednesday Adams, this would be the next big meme on Tik Tok.

All of which means that “M3gan” should get audiences dancing all the way to the theater to see this campy little thriller. I would have preferred if it had truly embraced its horror label, but I still loved the basic concept, the slasher moments and the sly satire.

And yes, I also loved that killer doll dance.