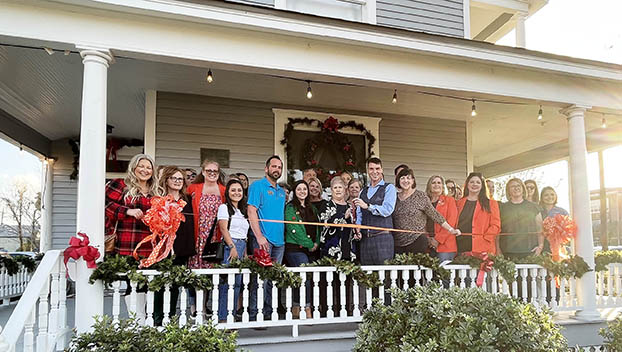 A free reception followed with museum tours and photos with Santa Claus.

“In 2017, Hurricane Harvey caused damage to the roof and walls to the museum, the administration building and the William’s building, which we rent out for events,” said Adam Conrad, president of the Heritage House Museum.

“We received FEMA grants and insurance money to begin the repairs to the property.”

Conrad said working within the historical confines of the home slowed the restoration project.

“We have to use the right type of wood, and the home has to have a certain look,” he said. “It was definitely an arduous task.”

In the 1970s, when the museum was founded, photos with Santa Claus was a free event for the public to view the home decorated for Christmas in the 1900s era.

“So, when it was time to open,” Conrad said. “We wanted the ribbon-cutting to be in conjunction with the Santa Claus event.”

The Heritage House Museum is a typical upper middle-class residence of the 1900-1929 periods. The structure was moved from its original location at 809 Front St. and restored to its earlier appearance.

The exterior of the home is painted gray with maroon trim, just as it was in 1919.

When major modification was made, the long leaf pine woodwork and original lighting fixtures inside were restored, and reproduction period wallpaper and curtains cover the walls and windows of the original two-story six room structure.

The house is listed as a Recorded Historic Texas Landmark by the Texas Historical Commission.

The rooms reflect the lifestyles of the upper middle-class family in the early 20th century in Orange.

William’s and his wife were instrumental in saving an old house from demolition and moving it to become the Heritage House Museum of Orange. He is also the founder of the Orange County Historical Society and created a photography collection that spanned half a century of local events and wildlife in his creation of his own record of history.

“The collection is open to the public,” Conrad said. “People come to conduct Orange, Texas, history and genealogy.”

Membership is $30 per person or $45 per family. Event information can be found on their Facebook page.