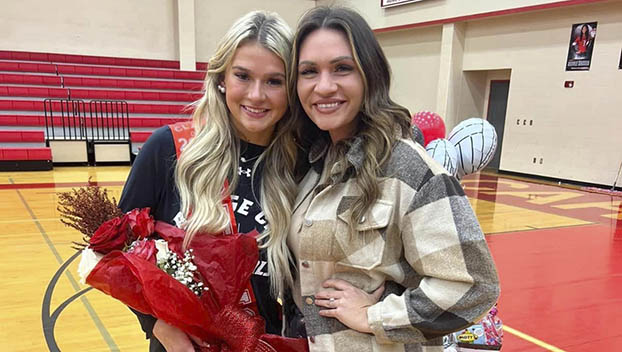 BRIDGE CITY – Every successful team in any sport likes to commonly use a football term to describe the leader of their squad, simply known as “The Quarterback.”

For the last three years, Doiron has set the tone as perhaps the best setter in Southeast Texas and has been the one who has made the Lady Cardinals “go” on their way to three straight district titles, included two perfect 12-0 records in district play the last two seasons.

With her efforts, Doiron is the 2022 All-Orange Leader Volleyball Team’s Most Valuable Player.

“That really is a great honor, but my teammates deserve a lot of credit, and I’ve had some great ones,” said Doiron. “To be able to set up some of the players I’ve been able too, I’ve been very fortunate.”

Doiron, the lone senior on varsity this season, racked up an amazing 535 assists last season to go along with 241 kills, 258 digs and 102 aces.

She’s was thrilled with the way the Lady Cardinals performed this season, going 30-12 and reaching the Class 4A Region III Regional Quarterfinals for the third year in a row. The Lady Cardinals have gone 35-1 in district play the last three years.

“It has been so awesome, and I will always cherish the great times I’ve had with all of my teammates,” said Doiron. “We always have high goals here and I set high goals for myself, too.”

Doiron and junior hitter Demi Carter rose up to become tremendous leaders for a Lady Cardinals, who sported five freshman and four sophomores.

“I knew we were going to be young this year but I’ve worked with those girls when they were younger and I knew the talent was there,” said Doiron. “You could just see them improve week to week and get more and more confident every time they stepped out on the court. It was fun to watch them, and I hope I was a help to all of them.”

Doiron has a special bond with freshman Cambree LaComb, who will take over Doiron’s top setter spot after recording 398 assists, 130 digs and 38 aces of her own. 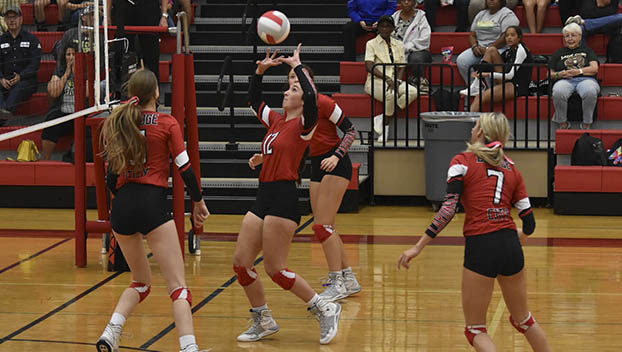 “I’m so proud of Cambree, just watching her and seeing the type of player she is. She’s going to be a great leader,” said Doiron. “I can’t wait to see her blossom even more. Really, I look at all of the potential with the future of the team. That it is really scary when I think about it. They have a chance to be great for years to come.”

Doiron has really been impressed with the freshmen class.

“That’s going to be a great group. If they all stay together, they will be awesome,” said Doiron. “I hope they continue their teamwork and friendships. It’s kind of weird. When I was a freshman, we had about 40 players out and here I am as the last one standing. But I had the pleasure of playing with amazing players that were ahead of me and then the young ones this year. I wouldn’t trade my experience for nothing.”

Doiron always chuckles when she is labeled as a just a pure setter because her overall game is superb.

She can attack the net with an superb kill skills. She has always hit the floor, diving for great defensive digs and has a tremendous serve that has kept opponents on their toes.

“I’ve always cherished the setter’s role, because it’s like I’m a quarterback out there. I’m making a lot of calls and getting my teammates lined up,” said Doiron. “It’s so awesome to get that perfect set and a teammate really smashes it. I’ve always thought I was valuable too in getting some key hits, playing good defense and getting some great serves in. I’ve always wanted to be an all-around player to help my team. I felt like I was able to do that.”

Doiron would like to continue her volleyball run at the collegiate level. She is getting some looks from Tyler, Hill and Blinn junior colleges.

No matter what, she will be a Big Red volleyball fan when she can next year.

“I hated to see the season end against Huffman because I thought we could get to State, but we had a great year for sure,” said Doiron.

“Maybe next year is the year. I know they have the talent and I’m definitely going to be one of their biggest fans.”