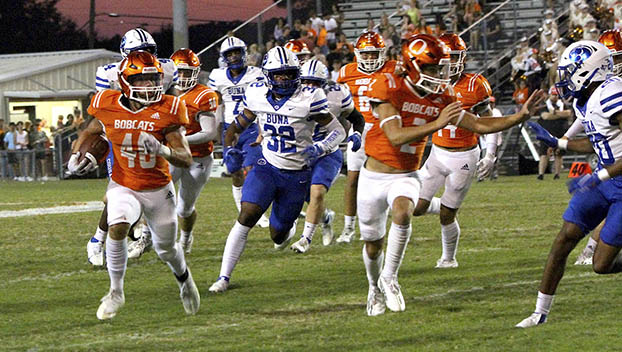 Orangefield senior running back Cameron Dischler (40) gets the edge for a big gain against Buna in District 10-3A Division I action at F.L. McLain Stadium. Dischler finished with 2,441 yards and 28 touchdowns on the ground. (Tommy Mann, Jr./Orange Leader)

ORANGEFIELD – It was a tough pill to swallow for the Orangefield Bobcats last Friday night as a memorable season came to an end at the hands of the Cameron Yoe Yoemen 42-19 in the Class 3A Region III Division I Area Round of the playoffs.

The Bobcats (9-3) fought Yoemen (9-3) all the way to the end in typical Oranefield fashion.

“I told the kids to hold their heads up high after the game,” said coach Josh Smalley. “Sometimes you try your best and give it your all and they certainly did that. Yoe had a great game plan, and I thought their defense really rose up and played better then they have all year. Congrats to them, they have a tremendous program and a rich history with several state titles over the years. But I’m super proud of our kids. They battled all the way through to the end.”

The Bobcats had so many highs this season in dropping down to the Class 3A ranks after battling in Class 4A the last two years in which they also made the playoffs.

With their move down, the Bobcats certainly had a bullseye on them throughout the season, especially in District 10-3A Division I play.

The Bobcats outscored their opponents 433-221 on the season. Even better, they outscored six district opponents 246-57 as they went on the claim their first outright district championship since 1988.

“We definitely had the target on our backs after we got moved back down to 3A for sure,” said Smalley. “The expectations went up and the district championship was our goal going in. We thought we were battle-tested going in, playing the likes of the West Oranges, Silsbees and Bellvilles of the world the last two years. But people need to realize that the competition in our district was pretty stiff. Their are some excellent players and coaches in our district.”

The Bobcats had to take on their two most potent district opponents on the road and passed with flying colors.

Orangefield gained huge momentum by defeating Anahuac 25-15 in their second district game and then sealed the district title with a gut wrenching 28-21 road win in Winnie against East Chambers.

“To go into those atmospheres against Anahuac and East Chambers and get those wins showed a true test of the character our kids had all season,” said Smalley. “That was quite the gauntlet, but our kids rose to the occasion and it was a tremendous feeling for everyone to get those, especially the East Chambers game, because of the history they made by winning district.”

Smalley has had some good Bobcats teams over the years but this group was definitely unique.

“Sure, they took things serious but they also had so much fun doing it,” he said. “The senior class was so incredible, they would go out and set an example in practice and on game nights. So many of them would make us all relax with great jokes and play certain music when certain coaches walked into the locker room. All of the kids got along and meshed together so well. It’s things like that when you realize you have a pretty good team.”

Smalley also coached many excellent seniors this year but one definitely stood out in running back Cameron Dischler, who zipped to a whopping 2,441 yards and 28 touchdowns.

“Dischler is such a great kid and he always leaves everything he’s got out on the field, at practice, in the weight room,” said Smalley. “He is such a team player. He’ll be the first to admit he wouldn’t have accomplished what he did without his teammates.”

Smalley has seen some good ones over the years as a head coach and as an assistant.

“Cameron may not be the fastest or the strongest kid I’ve ever coached, but he’s by far the best one I’ve ever had the pleasure to coach,” said Smalley. “When I was in Bridge City I worked with players like Johnny Dishon, Matt Menard, Matt Peebles and Cody Sparks. Here at Orangefield we had Carl Wiley, so that is saying a lot because those were great kids, too.”

Smalley understands the Bobcats could still be taking the Yoe loss hard, but it doesn’t take away from the superb season.

“It was tough for them and it will be for a week or so,” said Smalley. “But then that reflection will kick in and they will realize how special the year was and how they will be remembered by the school and the fans. I love these kids so much and I hope they know how much I appreciate their efforts all season along with the coaching staff. I love those guys too.”