Orangefield Bobcats scrap to the end in battle with Cameron Yoe 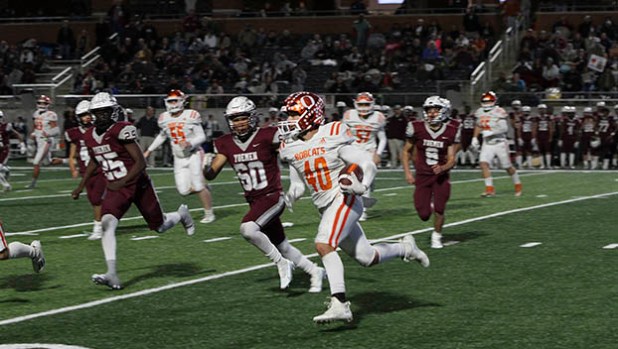 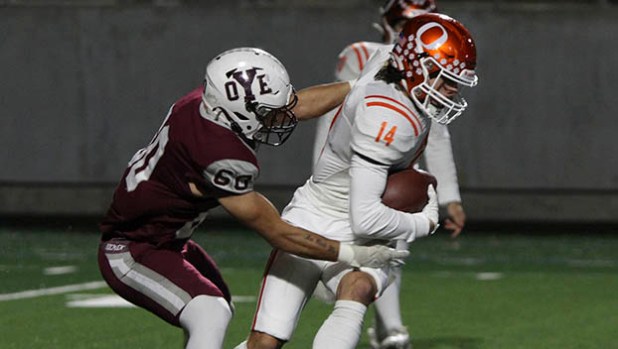 ALVIN – A tremendous 2022 campaign for the Orangefield Bobcats came to an end Friday night as they fell to the Cameron Yoe Yoemen 42-19 in the Class 3A Region III Division I Area Round of the playoffs at Alvin’s Freedom Field.

The Bobcats wrapped up the season with a 9-3 mark and captured their first outright district title since 1988 and defeated Shepherd 55-12 in the bidistrict round.

Cameron Yoe (9-3) utilized a balanced offense to thwart the Bobcats and also took advantage of some early Orangefield miscues to grab a cushion.

“We have such a great group of kids and I’m so happy for the season we had, winning district after moving back down to the 3A level with everybody trying to knock us off and they maintained their focused and got it done,” said Bobcat coach Josh Smalley. “I’m so proud of all the players and the staff, what a great job they’ve done all season.”

The Yoemen finished with 377 total yards while their defense limited the Bobcats to 241 yards.

“Things just didn’t work out well for us tonight against a very good Yoe team,” said Smalley. “The kids battled hard all the way to the end against a tough opponent and looking back, they will have a lot to be proud of.”

Yoe quarterback Braylan Drake completed 20-of-27 passes for 192 yards and four touchdowns and ran for another.

Kardarius Bradley powered the Yoe ground game with 104 yards and a touchdown on 14 carries. The Yoemen finished with 185 yards on 28 carries. Traylen Wilcox led the Yoemen with eight catches for 95 yards while Charlie Mayer and Kason Goolsby combined for eight catches 74 yards. Yoe will now go on to face Columbus in the 3A Region III Division I semifinals next week.

The Bobcats managed 162 yards on 39 carries on the ground. Senior standout running back Cameron Dischler wrapped up an amazing season with 134 yards on 23 carries and also threw a touchdown pass and caught another for a score on a hook and ladder play. He also had a interception on defense.The Bobcats had 79 yards in the air with quarterback Brayden Parker passing for 59 yards.

The Yoemen set up shop mostly in Bobcat territory due to a tough defensive effort and a couple Bobcat miscues to grab a 21-7 lead at intermission.

Orangefield had a three-and-out series to open the game and Yoe took over at the Bobcat 38. The Yoemen drove to the Bobcat 16 but Armado Reyes was stuffed on a fourth-and-1 carry.

After holding the Bobcats to another quick three-and-out, the Yoemen put together a nine-play, 45-yard scoring drive.

Drake connected with receiver Kason Goolsby on a 12-yard pass and a 11-yard dart to keep the chains moving. He then found receiver Charlie Mayer with a eight-yard touchdown strike. The extra-point kick failed as the Yoemen led 6-0 with less than a minute left in the first quarter.

The Yoemen got excellent field position again when Landen Greene blocked a Bobcat punt attempt and Reyes plopped on the loose ball at the Bobcat 11.

Three plays later Drake eluded a couple Bobcat defenders and scooted in for a seven-yard touchdown scramble. Drake then found Wilcox with the two-point conversion pass, pushing it to 14-0 with 9:30 left in the half.

The Bobcats bounced back nicely with one of those patented drives they are known far, going 75 yards in 12 plays with a little trickery at the end to get back to within one score.

Dischler had 53 yards on seven carries on the series, including a 25-yard burst down the left sideline to the Yoemen 44.

The Bobcats elected to go for it on fourth-and-3 from the 15 but were called for a false start, pushing them back five yards. The option to go for it stood and it worked to perfection. Dischler took a pitch from quarterback Brayden Parker, rolled to the right and spotted tight end Morgan Sampson all along on the back end of the right part of the end zone for a 20-yard touchdown toss as the play completely fooled the Yoe defense. Ty Butler booted the extra-point, trimming it to 14-7 with 2:57 in the half.

The Yoemen immediately answered with a seven-play, 65-yard scoring drive of their own.

Reyes got it going with a 17-yard dart to the Bobcat 48. On third-and-10, Drake hit Wilcox along the left sideline and Wilcox did the rest, barely avoiding running out of bounds on his way to a 34-yard touchdown reception, making it 21-7 with 0:40 left in the half.

The Bobcats escaped after another miscue when Gavin Perry-Koci mishandled a Parker pitch and Yoe pounced on the loose ball at the Bobcat 39 with 0:25 in the half.

The Yoemen couldn’t capitalize and also had a big scare to end the half thanks to Dischler. Dischler picked off a Drake pass at the Bobcat 15 and returned it all the way back to the Yoemen 34 as time expired in the half.

The Yoemen outgained the Bobcats 140-84 in the first half.

Drake completed 11-of-15 passes, many of them of the short variety, for 97 yards. Wilcox had three catches for 41 yards while Goolsby had three for 22 yards. Reyes had 23 yards on four carries.

Dischler had 61 yards on 12 carries for the Bobcats and the one pass completion for 20 yards as he was involved on 81 of the 84 total yards.

The Yoemen opened the second half with a eight-play, 62-yard scoring march. Drake teamed up with Wilcox on two passes that netted 34 of the yards. Drake capped it with a 11-yard touchdown toss to Charlie Mayer along the left side of the end zone, making it 28-7 with 9:10 in the third.

The Bobcats answered with the electrifying speed of Perry-Koci on special teams. Perry-Koci took the ensuing kickoff 83 yards all the way back to the Yoemen 4. Perry-Koci then did the honor of scoring, going four yards off right tackle for a touchdown. The extra-point failed as the Bobcats trailed 28-13.

The Yoemen countered with a 11-play, 66-yard drive with Drake teaming up with Mayer on a 21-yard touchdown strike down the left sideline, pushing it back to 35-13 with 3:05 in the third.

Bradley got loose with 4:24 remaining when he went up the middle for a 52-yard scoring jaunt, making it 42-13.

Orangefield showed plenty of fight, marching 69 yards in eight plays. They scored on an excellent hook and ladder call as Parker threw a short pass to Kane Smith, who pitched it back to Dischler, who scooted down the right sideline for a 46-yard score.