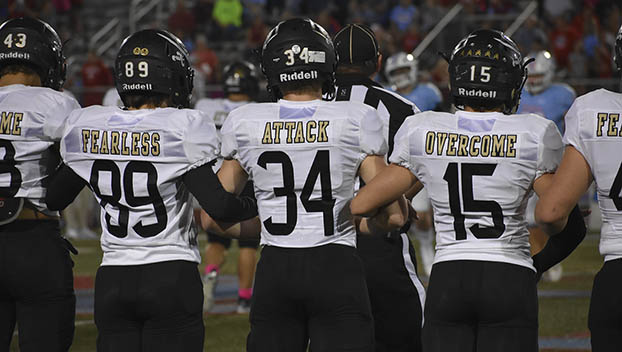 The Vidor Pirates captains head out for the coin toss against the Lumberton Raiders Friday night. (Keagan Smith/Orange Leader)

LUMBERTON – The Vidor Pirates lost a crucial District 10-4A Division I matchup with the Lumberton Raiders, falling 47-21 on the road at Raider Stadium Friday night.

The Pirates (3-4, 1-1) entered Friday night looking to extend their three-game win streak and claim first place in the district standings. The Raiders (6-1, 2-0) proved too much to handle though.

”They whipped us,” Vidor head coach Jeff Mathews said after the game. ”Lumberton just made bigger plays, they played a good game.”

The key to success for the Pirates is winning the battle at the line of scrimmage. They had their work cut out for them against a stout Lumberton defensive line — making life tough for a Vidor run game which had found its stride over the past few weeks.

The Raiders’ offense had no such problems, needing just three plays to score their first touchdown. Junior quarterback Lucas Powell rushed for 27 yards on the first play from scrimmage, then connected with Trey Kersh for a 37-yard touchdown pass along the sideline.

Lumberton extended their lead on the next series as Broc Bonner recovered a Pirate fumble, returning it 35 yards to the house for another score. Just halfway through the first quarter, the Raiders held a 14-0 lead.

After a punt by the Pirates, the Raiders took over and drove 61 yards before fumbling the ball at the Pirate 1. Vidor’s offense failed to capitalize on the opportunity, turning the ball over on downs after taking a loss on fourth-and-4.

Lumberton struck again to begin the second quarter, this time with a 43-yard touchdown reception by Kaleb Koch.

After being shut out in the first quarter, Vidor finally began to find their rhythm in the second. They strung together an 11-play drive, and Isaac Fontnow put the Pirates on the board with a three-yard touchdown rush on fourth-and-goal.

The big-play potential of an explosive Raiders offense once again created issues for their opponent. Powell threw his third touchdown of the night with a 52-yarder to Cole Rhodes. They missed the PAT, but extended the lead, 27-7.

While Vidor pushed downfield once more with time running out in the first half, a holding call inside the red zone prevented them from finding the end zone. They settled for a 26-yard field goal, but the attempt fell short, leaving the Pirates trailing 27-7 at the half.

The Raiders received the ball to begin the second half, but Powell fumbled near midfield. It was scooped up by Blayden Laughlin, who returned it for a 45-yard touchdown. The Pirates pulled closer, 27-14.

However, Lumberton’s offense shook off the mistake and kept rolling. The Raiders scored twice in the third quarter — Carter Wilson rushed for a 34-yard touchdown, followed by a 12-yard touchdown reception by Kersh.

Vidor’s run-heavy approach isn’t exactly conducive to late-game comebacks, and they continued to struggle on the ground as the fourth quarter got underway. The Raider’s front seven on defense had controlled the line of scrimmage all game, and that wasn’t changing.

Lumberton’s offense still dominated in the final frame, running up the score in the fourth quarter on a three-yard touchdown pass to Brady Fuselier. They maintained a commanding 47-14 lead despite a botched PAT. The Pirates took over with four minutes remaining, and Wyatt Flores rushed for a touchdown as time expired. The late score didn’t alter the outcome of the game, and the Pirates fell to the Raiders, 47-21.

The Pirates will return home next week to welcome in the Livingston Lions while the Raiders travel to Huffman to take on the Falcons.