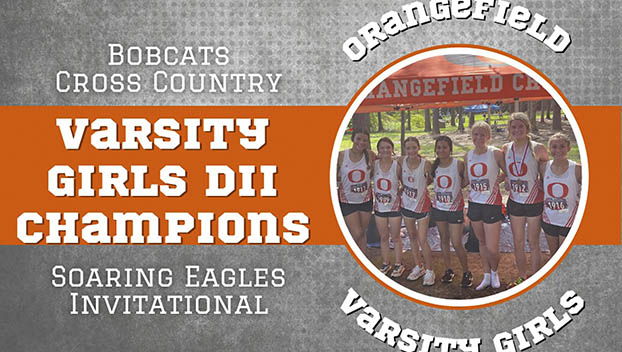 WOODVILLE – This past weekend the Orangefield varsity cross country teams took on the Soaring Eagle Invitational.

The Girls would be up next to take on the course. The first Lady Bobcats athlete to cross the line was Kendall Sullivan in 11th place running a time of 14:28. Teammates Aubrey Beck and Kadee English also produced a strong showing with a 16th and 17th place finish, running times of 14:48 and 14:51.

Sadie Malagarie had another solid outing with a time of 15:37 and Madison Trammell would have another week of running below 16 minutes with a time of 15:46. Jocelyn Hernandez and Natalie Black rounded out the team with Natalie beating her time from last week by almost a full minute.

The combined effort of these young ladies would be enough to win the championship as a team in the 4A and under category.

The Boys team would be the first to compete this weekend though they were missing many members due to injury they would still put on a show.

Jackson Agerton grabbed the 5th place medal running another blazing fast time of 12:29. Shortly after Jackson would be Nate Clausen in 11th place running a time of 13:11.

This week two new faces made their first appearance.

Madilynn Chance  crossed the line first in 23rd with a time of 16:16 and just behind her was Breanna Lasalle in 24th place with the time of 16:17.

These girls performed very well in their first race and will be a great help to the team moving forward.