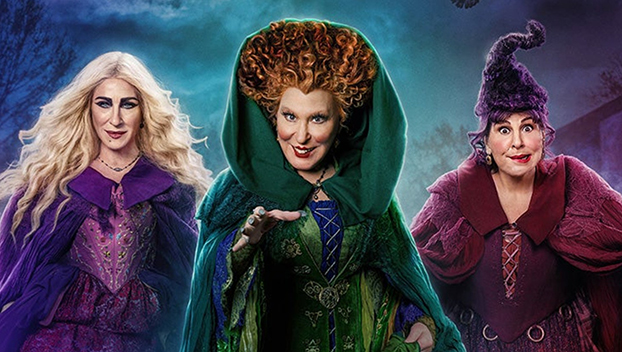 I’m old enough to have warn memories of the original “Hocus Pocus” movie.

It was a lot of amusing, albeit cheesy family fun. What’s more, I remember thinking the Sanderson sisters, the witchy villains of the original movie, brought an amusing comic sense to the film.

I don’t know why it took 29 years to make a sequel, but the sisters are back and once again plotting to eat all the children in Salem, MA. And once again, the film’s leading ladies are having so much fun leaning into the camp of their characters that it’s easy to get caught up in their antics.

It’s still very cheesy, but it should please parents looking for some PG-rated scares this Halloween.

I say should because the plot has some modern updates that may give some parents pause. The story follows a trio of teenage girls (Whitney Peak, Lila Buckingham and Belissa Escobedo) who have a yearly tradition of going into the woods to practice witchcraft.

This is how they accidentally resurrect the Sanderson sisters, putting the entire town at risk. Now it’s a race against time to put things right.

The comic schtick between the Sanderson sisters continues to be first-rate. Midler gets to ham it up, while Parker runs around acting boy-crazy and ditzy while Najimy just plays adorably dumb. They made me laugh repeatedly, which is what the filmmakers needed them to do.

It makes for campy fun, which is hammered home by the moment when they show up at the Halloween carnival only to find they are competing in a Sanderson Sisters lookalike contest against a bunch of drag queens.

Fans of RuPaul’s Drag Race will get a kick out of the cameo appearances here.

It’s also at this moment that Midler gets to sing — which is always great. This time we are treated to Elton’s John’s “The [Witch] is Back.” It’s an obvious but delightful choice for a big production number.

More credit for the supporting cast, which includes Hannah Waddingham as an OG witch, Sam Richardson as a friendly magic store owner, Dough Jones returning as a kind-hearted zombie and Tony Hale playing the caramel apple-obsessed town mayor. All of these actors lean into the film’s sense of silly fun with varying degrees of success.

I won’t claim to care about the teenage protagonists, but I am several decades too old to get caught up by teenage angst anymore. I suspect that younger audiences might still care, and this subplot certainly works to flesh out the story in between the various comic moments.

Ultimately, let’s call “Hocus Pocus 2” a guilty pleasure for me. The drama is hit-and-miss, and the humor isn’t very biting, but nor should it be. This is just a mildly scary blast of spooky family fun — great feature entertainment for a middle school Halloween party.

What’s more, I’d love to see “Hocus Pocus 3” one day. Hopefully soon. Let’s not wait another 30 years for a sequel.