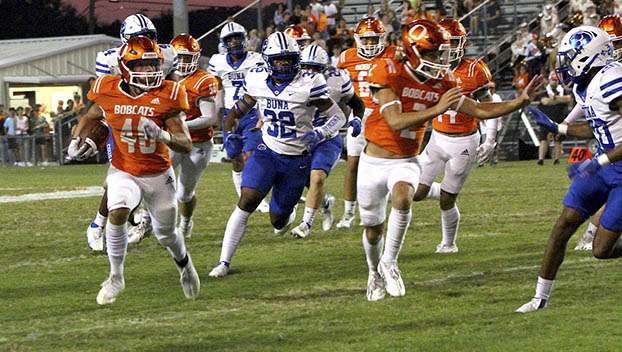 ANAHUAC – No question about it, the Orangefield Bobcats made a huge statement in District 10-3A Division I play Friday night on the road.

The Bobcats went into a hostile environment and took down the Anahuac Panthers 25-15 in a crucial early district game.

The Bobcat defense showed up in the second half, stuffing the Panthers in the air and on the ground in the last 24 minutes, holding Anahuac scoreless.

The front seven held the Panther rushing game to just 28 yards on the ground, forcing them to use the air for any success.

Offensively for the Bobcats, Cameron Dischler stood on top. His ability to break through tackles and accelerate through and around the defense was showcased all night long against the Panthers.

Dischler rushed 37 times for 261 yards with a rushing touchdown, and even had a 35-yard passing touchdown while he was at it.

The Panthers didn’t have an answer for Dischler and the Bobcats made them pay all game long.

The Panthers offense clicked early, but struggled to keep it going in the second half. Quarterback Brady Barrier went 19-of-35 with 287 yards passing on the day. His most targeted receiver was Talon Cunningham, who hauled in in five catches for 110 yards and a touchdown catch.

The Panthers got things going quick with two big passes from Barrier to Cunningham. Barrier’s first pass to Cunningham would go for a big 37 yards, followed up by a 28-yard dart for a touchdown. Thomas Daleo would punch in the two-point conversion attempt, making the score 8-0 Panthers with just over 10 minutes left in the first quarter.

The Bobcats answered on the next drive, with a time-eating push down the field for points. Dischler got the majority of the carries, getting consistent yardage until he was able to bounce out a big run. A reverse pitch play would have Dischler finding the outside and running it down to the Panther 1 for a 27-yard carry. Gavin Perry-Koci, who had 45 yards on eight carries, punched it in for the two-point conversion, tying the game at 8-8 with 4:03 left in the first quarter.

The Bobcat defense forced the ball back to their offense, preventing the Panthers from taking the lead.

Orangefield’s offense would take advantage of the opportunity and score quickly. Dischler found Kane Smith on a halfback pass for a big 35-yard touchdown pass. After the PAT the Bobcats led 15-8 in the first quarter.

The Panthers tied the game up with just two minutes left before the half. Both offenses would punt it back and forth after the Bobcats took an early lead, but the Panthers found their rhythm and Barrier was able to find consistent completions to march down the field. One big pass found Talon Cunningham for 21 yards. Barrier punch it in from a yard out himself. After the PAT the game was tied at 15-15 with 2:03 left in the first half.

The Bobcats went to the reverse double pitch play for another touchdown to take the lead. Dischler took over the drive with a big 32- yard rush to break open the drive early, getting the ball inside the Anahuac 10. After a couple of stuffs from the Panthers, Dischler got the reverse double pitch for 11 yards and a touchdown. After the PAT the Bobcats led 22-15 with four minutes left in the third quarter.

Defense became the name of the game in the second half, and after the Bobcats got another stop, their offense drove down the field to extend their lead late. Dischler continued his control of the run game with six carries on the drive, two going for 25 yards to keep the drive alive. The Bobcats would got all the way inside the Panther’s 20 and would set up to kick a field goal. Ty Butler lined it up from 30 yards out and nailed it with room to spare as the Bobcats led 25-15 with 2:25 left in the game.

The Bobcats finished with 357 total yards while the Panthers had 315.

The Bobcats will look to take on Tarkington and keep their district record undefeated with the momentum this game gives them.