“The kids are up for the challenge.” West Orange-Stark coach talks rebound opportunity this week. 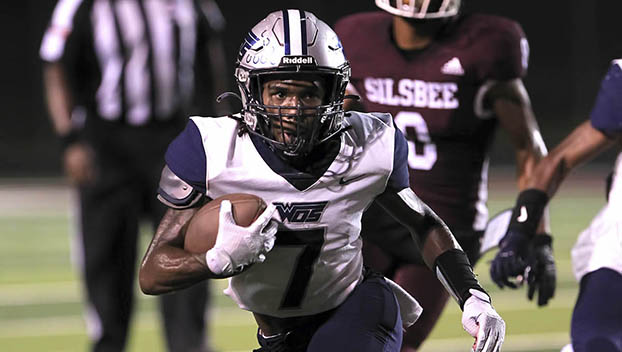 WEST ORANGE – Looking for a big bounce back this week, the West Orange-Stark Mustangs are preparing hard to take on the Liberty Panthers in their second District 9-4A Division II contest.

WO-S will do its best to not overlook the Panthers this week. The Panthers come in 0-5 and 0-1 in district but have battled every game. In their five losses, the Panthers have only been outscored by a total of 39 points.

Coach Hiawatha Hickman feels the Mustangs will rise up for the challenge of ending the school’s three-game losing skid.

“I thought we really played well early against Silsbee, we simply just didn’t have an answer for No. 1 (Dre’lon Miller),” said Hickman. “I felt we stopped the running game well, but their passing attack really hurt us. That was one of the best games their quarterback, (Mason) Brisbane, has ever played. He was right on target. When he wasn’t, Miller was making some great catches.”

“He’s just a sophomore, so every game, he learns more and more about what we want from him,” said Hickman. “We played that game without two of our backs in Jamal Shaw and Raymond Mallett Jr., and we look to have those guys back this week. We had some opportunities that we didn’t take advantage of for sure. We also have seven to eight sophomores playing a lot, so we are going through some growing pains, but we are going to get better.”

The Mustangs are facing a Liberty team that has totally changed its offensive look under first-year head coach Chris Lackey. The Panthers have dropped their traditional Slot-T and Wing-T formations and have moved to the spread.

Quarterback Gavin Fontenot certainly makes the offense go. He has passed for more than 400 yards and five touchdowns and leads the team with 306 yards and two touchdowns on the ground.

He likes to get the ball to receivers Zach Breaux and Davin Victoria. Breaux has 16 catches for 267 yards and four TDs.

“It’s not the same Liberty, because they were always about the ground-and-pound game,” said Hickman. “They are still transitioning to the spread and they have some athletes that can make it work.”

Hickman is impressed with Fontenot.

“You can tell he has a motor and everything runs off of him,” said Hickman. “He makes good reads, and we have to play smart and keep him in front of us.”

“They scrap pretty good, offensively and defensively,” said Hickman. “We have to protect the ball. Liberty took advantage of a couple Jasper mistakes to stay in that game last week. We’re going to have to bring it.”

Hickman would love to see the Mustangs get back on track when they welcome in the Panthers to Hooks Stadium.

“The kids are up for the challenge and we’re going to have some kids back from injuries that is really going to help,” said Hickman. “They are really giving a good effort. Now it’s time to go out there, get a win and get back on track. We just navigated a very tough five-game stretch to start the season with a new staff. and we’re still transitioning. It’s a process. The next four to five weeks, we just want to keep on getting better and make a strong push.”