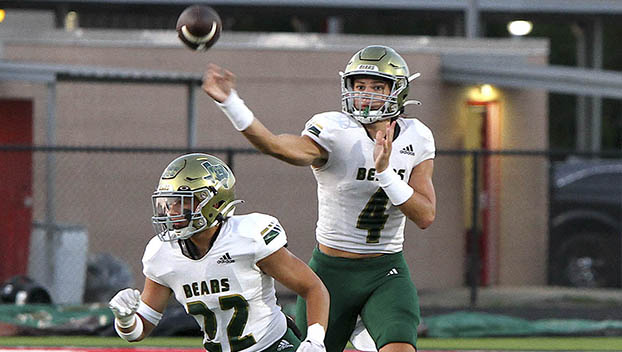 LC-M quarterback Dean Reynolds looks to get off a pass as running back Jonah Fuller looks to block against Bridge City earlier this season. (Tommy Mann, Jr./Orange Leader)

That will be the case for the Little Cypress-Mauriceville Battlin’ Bears Friday night as they will play host to Spring Legacy in their first home game of the season on their brand new turf.

To make it even more special, it will be Homecoming.

“Phew, it’s been a long time coming, but it’s going to be a tremendous atmosphere,” said LC-M coach Eric Peevey. “We expect a sell-out with people standing, too. The kids have been waiting on this, and the entire school and fan base, too. Friday can’t get here quick enough.”

Peevey is proud of the Bears as they finally reached this moment.

“Counting our two scrimmages and four games, we’ve loaded up on a bus for six straight weeks,” said Peevey. “That can get old. That last trip to Houston Kincaid was a three-hour trip going, and I felt like we were starting to show a little wear and tear.”

LC-M (2-2) dropped its last game to Kincaid 23-6. But a new-found energy took place last week during the bye week, as the Bears were finally able to practice on their new digs.

“Last week really ignited everyone, and having that bye week then worked out perfectly,” said Peevey. “The kids were flying around at every practice and looked like they gained an extra step. We were able to tighten up a few things and work on some of the things we thought we were struggling at. It was really a blessing.”

The Bears are getting ready for an explosive Legacy team.

Legacy runs a potent spread offense led by quarterback Jacob Smith, who has passed for 987 yards and 11 touchdowns and has rushed for 174 yards and a score.

Running back Rorie Hawkins has zipped for 438 yards and five TDs on just 46 carries, and fellow back A.J. Merrida is also explosive, rushing for 268 yards and a TD on 27 totes.

“The Smith kid is one of the best quarterbacks I’ve seen in the last three or four years and he has a tremendous motor,” said Peevey. “The Hawkins kid, you have to keep him in front of you or he can take it the distance. The Henderson kid at receiver, he’s a freshman but plays like he is 28.”

Peevey feels the Bears will have to play hard along the defensive front.

“Legacy is huge on the offensive line and we have to match up with them physical,” said Peevey. “They bring a load.”

Peevey realizes the atmosphere will be rocking come Friday, but wants to make sure the Bears are honed in on the task at hand. District 10-4A Division I play cranks up Oct. 7 at Vidor for the Bears.

“This game is big in so many ways, and we want to start district play with some confidence,” said Peevey. “Legacy has some tremendous athletes and it is the type of game that gets us ready for the likes of Vidor, Lumberton, Huffman, Splendora and Livingston.”