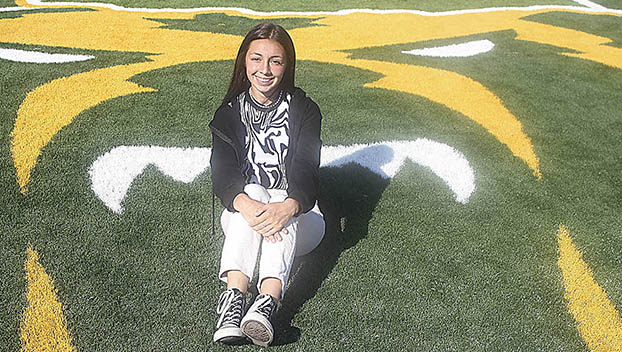 LC-M senior Annabelle Fisher is not only one of the school’s biggest competitors but one of its most avid supporters. (Van Wade/Orange Leader)

LITTLE CYPRESS – Everyone who follows Little Cypress-Mauriceville senior Annabelle Fisher knows she’s a “gem,” whether if she is running cross country, starring on the soccer team or spearheading the Lady Bears track squad.

What many don’t know is she is a “diamond” away from all the sports, as well.

Fisher is having a wonderful senior year thus far and constantly keeps busy as she awaits collegiate soccer at Texas State University.

She is a member of the Student Council, the Interact Club and National Honor Society, while also she logs all of those miles in training for her sports.

She stresses to the underclassmen to let every moment soak in.

“As a senior, I like to energize the kids in the lower grades and try to get them involved in everything possible,” said Fisher. “It doesn’t necessarily have to be in sports. There are so many things to be involved in on our campus. I tell them all the time that high school goes by so fast. Try to do as much as you can do and enjoy. Plus, it looks really good when you start applying for college scholarships.”

“She epitomizes everything we want a Bear to be,” said DuBose. “She’s sweet and so cordial to everyone she runs across. She has been raised with such high morals and she passes that along to everyone she comes across.”

Fisher may not be a cheerleader, but she is a loud supporter at so many events.

“The thing I love most about my school is that we’re like a big family,” said Fisher. “We have so much school pride. I love those dress-up days we have, those are a blast. I came as Adam Sandler one day. I got a lot of curious looks, and everyone loved it. I just like to have fun with all my friends and try to put smiles on people’s faces.”

The Interact Club is something Fisher really enjoys.

Members make blankets for puppies in need and prepare and host the Winter Formal. They also make and sell the colors the student section pops out during football games.

Grades are really important to Fisher. She is enrolled in three college courses, earning early credit.

“I’m currently taking college courses in English, Economics and Anatomy,” said Fisher. “It gets me going on a nice track and will help in trying to get scholarships for when I do go to Texas State.” 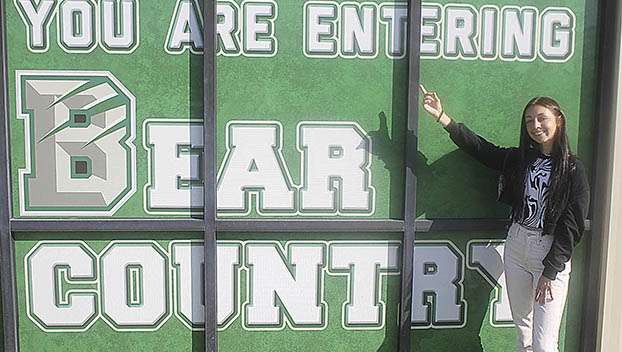 LC-M senior Annabelle Fisher has a lot of pride whenever she’s representing her school and is a bundle of energy in everything that she does. (Van Wade/Orange Leader)

Fisher also finds time to work, as she has a job at The Hut.

“I’m trying to save as much money as I can for college,” said Fisher. “My job when I get to Texas State is going to be soccer, so if I can save some money, it can relieve some of the burden off my parents.”

Fisher has flourished under the guidance of her parents, Josh and Lisa Fisher.

“Those two are my rocks and they’ve been so supportive over the years,” expressed Fisher. “We’ve been to soccer camps and matches all over the place. This summer I was able to play in Tennessee and we’ve also been to South Carolina and North Carolina. Those have literally been our vacations and I’m so grateful for them.”

Fisher is concentrating on cross country, in which she is chasing another district title and will pace herself to try to get to the Class 4A State Meet.

However, her true passion is soccer.

“I’ve been playing soccer since I was 5 and I wouldn’t have it any other way, I simply love playing,” said Fisher. “Everyone knows I like to run, and soccer definitely is a sport where you are doing it constantly. I’m looking forward to a great final season here. We’ve made the playoffs every year, and this year’s team has a lot of potential.”

There isn’t a whole lot of time to get extra rest, though Fisher handles it well.

“I just want to be involved in everything possible,” said Fisher. “I like to root and support everyone in what they do. On Friday night football games, you’ll see me along the fence. I’m one of the loudest ones out there. We all pull for one another here, and that really makes LC-M special.”

DuBose, who has been one of Fisher’s biggest fans at cross country and track meets, knows she will leave a nice reflection when she does graduate.

“Annabelle Fisher is the framework of what we would like to see every student become,” said DuBose. “She is just such a special kid that brings so much to the table. She’s been such a positive influence and she’s not afraid to be loud and proud representing her school. She’s just great in any school environment and we’ll always appreciate that.”