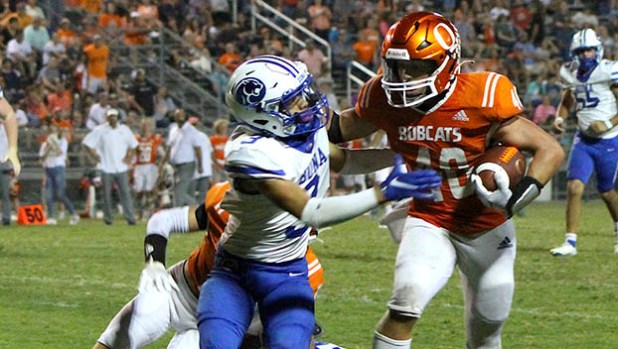 Orangefield running back Cameron Dischler (40) fights off a Buna tackler as he gains some big yardage at the end of the second quarter. (Tommy Mann, Jr./Orange Leader) 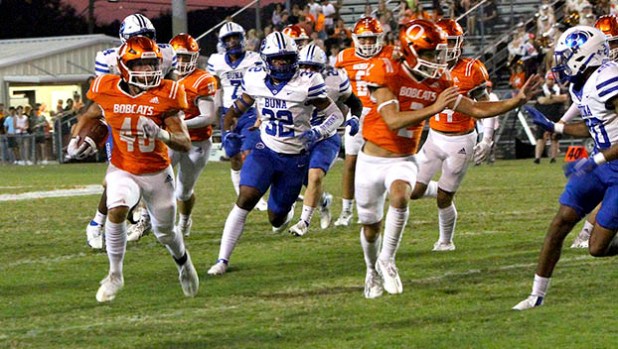 Orangefield running back Cameron Dischler (40) looks for a running lane during the first quarter against Buna on Friday night. (Tommy Mann, Jr./Orange Leader)

ORANGEFIELD – Having their running game churning, led by senior running back Cameron Dischler, the Orangefield Bobcats hammered out a 28-14 district-opening win over their long-time rival the Buna Cougars 34-0 at F.L.McLain Stadium Friday night.

Dischler led the way all game for the Bobcats (3-2, 1-0), pushing his way up the middle and finding his speed around the outside for the big breakaway plays. They consistently fed him carries and he capitalized time after time. Dischler would get 27 carries going for 239 yards on the night, with his longest being a 67-yard touchdown run down the sideline.

Dischler’s ability to extend runs, and his acceleration through the hole is what makes him so explosive.

The Cougars (1-4, 0-1) offense was led by running back Jacob Johnson, who had 17 carries for 134 yards on the ground. Johnson was the Cougars’ main run focus, and the main reason the team had a chance towards the end of the game. Johnson’s longest run was 34 yards.

His ability to make quick cuts at the line of scrimmage made it hard for the Bobcats to minimize his effect.

The Bobcats got out to an early lead, but a couple of errors on offense, and the Cougars taking advantage, made this game a lot closer late. The Cougars made strides for the comeback, but the Bobcat defense held strong and kept them out of the end zone when it mattered most.

Orangefield jumped out to an early lead on the Cougars, after getting great field position on their first drive after stopping the Cougars quickly. The run game took control early with Dischler breaking a big 22-yard run to put the team in the red zone after starting on the Cougar 46.

Gavin Perry-Koci, who had 69 yafds on nine carries, punched it into the end zone from 13 yards out, around the outside. Ty Butler’s extra-point went through, giving the Bobcats a 7-0 lead with 8:46 left in the first quarter.

Dischler took control and powered the ball down the field, with six of the nine carries on the next drive. He had multiple big runs, but the biggest were a 19-yard bull rush and a 17-yard burst past the defense. Dischler capped it from 12 yards out for the touchdown, making it 13-0 after a missed extra-point with a minute left in the first quarter.

The Bobcats kept up the pressure with another running touchdown, this time from Case Singleton. Orangefield’s offense would take off six plus minutes on the march, methodically working the ball down the field. Quarterback Brayden Parker found his first pass to Singleton, who made an outstanding catch.. Singleton was be the one to finally punch it in from 22 yards out, finding a hole on the outside.

Dischler scooted in on a two-point conversion to make it 21-0 Bobcats with 4:44 left in the first quarter

The Cougars finally answered back in the air, with a big 30-yard touchdown pass from Toby Marse.

Johnson ran well field to start the drive, breaking off three 10-yard runs to get the ball moving. Marse stepped back and found Kayden Dill for 30 yards over the top of the Bobcat defense. After the PAT went through, the Bobcats led 21-7 with just over two minutes left in the first half.

Buna got a gift thanks to a fumble from the Bobcats inside their 5. The Bobcats, however, stopped the Cougars on a fourth down attempt inside the Bobcat 10, giving the Bobcats the ball.

On the first play of the drive, a pitch went wide and rolled into the end zone. Cougar Carson Kondos fell on it for the touchdown, trimming the gap to 21-14.

Dischler broke it open for a massive run to extend the Bobcats’ cushion as the fourth quarter started.

Dischler p passicked off a Marse on the defensive side at the Bobcat 4, stopping a potential tie.

The Bobcats got stuffed a couple times, but Dischler broke around the outside for a 67-yard scamper past the Cougars for a touchdown. After the Butler extra-point went through, the Bobcats led 28-14 with 9:43 left in the game.

The Bobcats will face a challenging road trip next week when they visit the Anahuac Panthers.