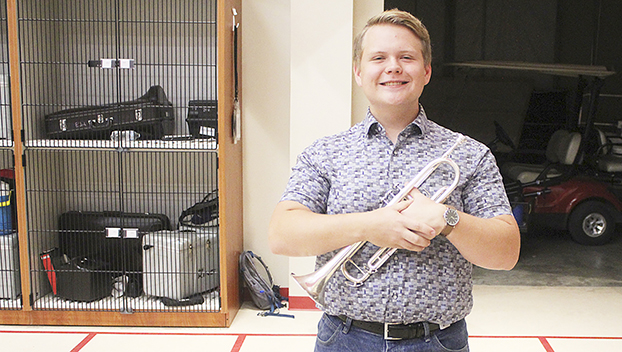 Bridge City senior Mason Pruett loves to play his trumpet for the Bridge City Band and is enjoying his run as a Drum Major in 2022-23. (Van Wade/Orange Leader)

BRIDGE CITY — Mason Pruett doesn’t like to “toot his own horn,” but what he does to enlighten the Bridge City High School campus is very loud.

The senior is heavily involved in student activities and wouldn’t have it any other way.

He is a drum major and plays the trumpet in the excellent Cardinals band.

He is a member of the National Honor Society. He’s a key player in the district’s STEM Bus project and he also finds time to participate on the powerlifting team.

“A lot of students always say they can’t wait to get out of school, and I felt like that at times, but now it is kind of bittersweet,” said Pruett. “It has been so much fun, and now it is going by so fast. I’m going to make the best of it and I’m ready to have a blast.”

He’s not a rah-rah type; he does everything by example, according to Royal.

“He has such high integrity and a flawless reputation,” she said.

One thing for certain, playing the trumpet in the band has always been a blast for Pruett.

He got hooked in fifth grade and was in the band by sixth grade. When he reached junior high, his elective choice was band. It turned into a passion, and playing for Bridge is “something special,” he says.

The Cardinals Band has racked up numerous honors the last several years, especially in marching contests.

“Ever since we got our new band hall when I was in junior high, the progress of the band has been amazing,” said Pruett. “Our band directors are so passionate, and it translates over to the band members. We spend a lot of time practicing and it carries over well in our performances.”

Pruett is enjoying his role as drum major.
There is a lot that goes into it, like leading the band while playing in the stands and marching on the field.

“We’re also responsible for getting the music together and making all of those copies for everybody,” he said. “I try to lead in my own way. I’m not the type of person that is over the top when I’m trying to help someone. I want to be a reason why the younger kids can enjoy band.”

He is excited about what is ahead. Contests begin in October and band members are already getting pumped up for that. 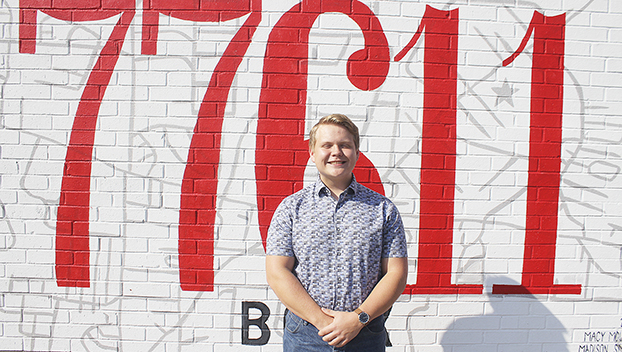 Bridge City senior Mason Pruett has a busy schedule and loves helping inspire young Cardinals to be the best they can be. (Van Wade/Orange Leader)

Pruett is proud of being a member of the “STEM Bus Team,” a project presented to the school board last year.

The students worked for months converting an old school bus into a fully functional STEM classroom/lab on wheels.

It’s going to travel from campus to campus with functional things inside the bus so students can learn in a fun atmosphere.

Students are constructing different individual things that will highlight each trip the bus takes.

“I’m kind of the computer geek of the group,” said Pruett. “I know one thing, I’ve never learned so much about WD40 then I have in the last few months. I have looked it up so much. It’s a great project and something to be proud to know that you were a part of for years to come.”

Pruett has enjoyed his stint working with Youth Leadership.

“When you lived in our area all of your life, you know how important that is,” said Pruett. “We did really well, and the people there really appreciated everything we did, which makes it so worthwhile.”

Pruett never considered himself a tremendous athlete but he picked up powerlifting and has been a part of a solid Cardinals team the last couple seasons. His brother, Blake Pruett, was a standout baseball player for the Cardinals and graduated in 2016.

“We are different in a lot of ways, but he has always rooted for me,” said Pruett. “He always wants me to blaze my own path, and I have always respected that. I’m not the best powerlifter in the world but I like the competition and have a lot of fun with my teammates.”

Pruett has plenty of support.

His father, Brad Pruett, and stepmom Marianne Pruett have attended many events over the years. Mason lost his Mom, Shannon Pruett, while he was in sixth grade.

“I know my Mom would be proud of me and she always pushed me to be the best I can be,” said Pruett. “My Dad and Stepmom have had my back so much, and I really have appreciated that. Dad was always there at Blake’s baseball games and he’s been right there at my powerlifting meets and band events.”

Pruett spends nearly half his school days enrolled at Lamar State College Orange, getting ahead.

He has plans right after graduation.

He wants to major in engineering  and would love to go to Texas A&M, but Lamar University would be good, too.

Now it is all about wrapping up a strong year in Cardinals Country.

“I want to have fun and do as many good things that I can, that’s just who I am,” said Pruett. “I want to make a positive impact, one that people will remember me for way after I’ve graduated.”