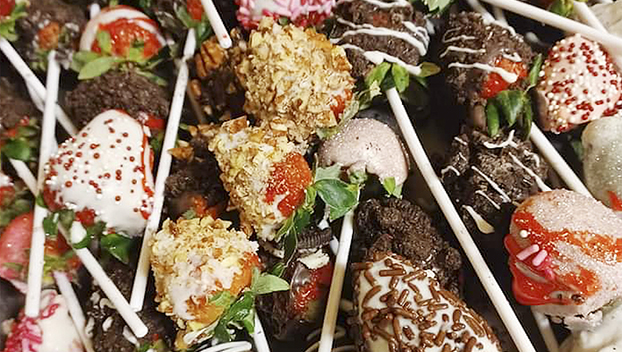 Since Orange Newsmedia last spoke with him, he has continued to grow his business while studying criminal justice and forensic science at Lamar State College Orange.

Rogers credits his family with inspiring his passion for culinary arts.

Many of his recipes are family favorites.

Of his recipes, he says, “My dad and stepmom introduced me to baking. My pound cake is a family recipe, and the sweet potato pie too.”

Sweet potato pie and pound cake are among the many desserts customers may order from Rogers.

Some cakes may be garnished with vanilla pirouettes or infused/topped with pecans, cookies, candy or crème.

The expansive menu is designed to suit varying palates.

“We offer a menu centered around our customers’ needs and confectionary desires,” Rogers said.

His birthday cake sugar cookies are his current frequent seller.

While acknowledging past mistakes, Rogers aims to look forward.

He endeavors to use himself as an example to troubled teens. He hopes to inspire them to make productive choices.

“I have four mentees similar to me; they come from the same situations,” Rogers said.” I’m directly involved in my community; this is how they learn about business.”

Despite COVID19, inflation and the difficulties that accompany owning a home-based business while in school, Rogers has maintained a positive outlook.

His grit and determination are fueled by his mantra: “Perseverance, no matter the situation. Keep on keeping on.”

He continues to work towards his goal of securing a food truck for Cupcake Empire. Until then, customers may order desserts by calling 409-724-9398 and picking them up from him.