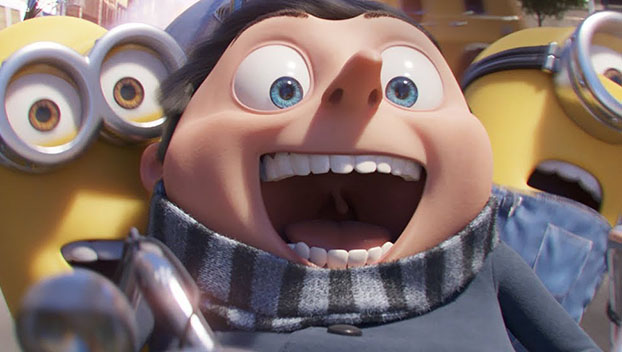 “Minions: The Rise of Gru”

The new “Minions” movie is critic-proof. If you have young kids, there’s nothing I can say to keep you from seeing “Minions: The Rise of Gru,” which opens in theaters this weekend.

Fortunately, I have no intention of maligning this fifth “Despicable Me” spin off movie. I won’t be calling it great cinema anytime soon, but the film certainly works because it is over-stuffed with funny characters, it’s fast-paced and, most importantly, it has some genuinely laugh-out-loud moments.

Young kids will love it, and mom and dad will enjoy a chuckle or two.

This latest film is a prequel that rewinds to the days when a bad boy named Gru (Steve Carell) wanted to join a group of San Francisco supervillains known as the Vicious 6.

The main story finds Gru trying to join the group, stealing a magical stone and then trying to survive the Vicious 6’s retaliations with the help of Dr. Nefario (Russell Brand), a kung fu acupuncturist (Michelle Yeah), and of course, those yellow bundles of chaos known collectively as the Minions.

With apologies to Carell and this impressive cast of actors in this movie, it’s the minions and their mayhem who make these films so much fun.

Indeed, perhaps the biggest problem with “Minions: The Rise of Gru” is there is too much Gru, leaving the Minions to play in sequences that are still very funny, but not always connected to the main plot.

I enjoy the energy and laughs from these side bits of chaos and wish there was more.

Credit much of this to French animator/director/producer Pierre Coffin, who provides the vocal babbling for all of the minions. He continues to give superb comic performances that are accessible to audiences of all ages.

Despite directing the original “Despicable Me” movies, he does not get enough credit for the success of this franchise.

And dear heavens, his latest creation, Otto, may be the funniest/dumbest minion yet.

I do appreciate that the film clocks in at just under an hour and a half, and I certainly enjoy the retro animation and classic music in the film’s soundtrack.

If you’re making a family animation movie, it’s important to add moments that will appeal to parents in the audience.

All of that being said, “Minions: The Rise of Gru” succeeds because it panders so effectively to its elementary school fan base. The story may be mediocre, but it doesn’t matter. As long as the Minions make the kids laugh, then the movie is a success.

The kids laughed a lot at my screening.