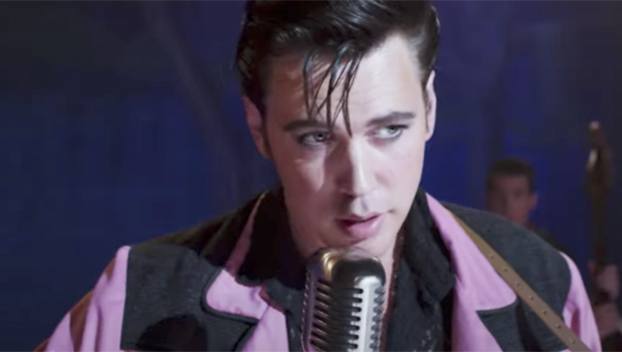 Much like the man himself, “Elvis,” is a larger-than-life mess of a movie.

It features a fascinating central performance with a lot of glitz and glamor, but that bloated excess keeps us from getting to know the real man under the rhinestone jumpsuits.

Still, credit Austin Butler in the title role. He exudes so much raw animal magnetism that it’s impossible to look away. There’s an early moment where Presley quiets his hecklers by launching into a song that announces his arrival as a one-man sexual awaking for the nation.

Watching this scene, it’s easy to see why Elvis Presley would soon be crowned the King of Rock and Roll.

Also watching Elvis is a music promoter/flimflam man named Col. Tom Parker (Tom Hanks). He sees the potential in the young rocker and signs him to a devil’s bargain one night.

Col. Parker promises to give Elvis the world, but at what cost?

I wish that I could say that was the central thesis of this movie, but Elvis Presley is such a huge figure that director Baz Luhrmann is forced to run through the man’s life at breakneck speed, leaving little opportunity for serious reflection.

Things like Elvis’ military service or his Hollywood years are left on the cutting room floor, and still the film doesn’t have enough time to truly get under the man’s skin.

This is a character who would be better served by a ten-part miniseries on TV, but credit Luhrmann for the attempt, and for making sure that the film is always captivating during its 2 ½ hour runtime.

“Elvis” may be over-stuffed, but it’s seldom boring.

It pains me to say this, but the biggest problem with “Elvis” comes from the inclusion of beloved Hollywood icon Tom Hanks as Col. Parker. Buried under a fat suit and an off-putting accent, Hanks is so jarring that it keeps you from seeing the man under the artifice.

This movie is essentially a two-hander, and when one of the characters falls flat on his face, it’s impossible for the rest of the movie to survive.

The other major issue is the way “Elvis” treats the supporting characters in his life.

Priscilla (Olivia De Jonge) is simply a pretty girl who flits in and out of the picture.

All of which adds up to a high-profile, hit-and-miss movie. There are moments that seem to touch the brilliance of the Elvis persona, but the movie as a whole doesn’t truly get underneath the man’s skin.

I suspect his fanbase will be mildly disappointed by this slight, yet always engaging, portrait of “The King.”