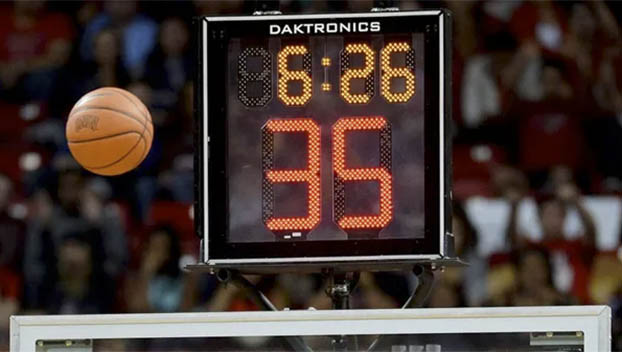 If you’ve been to enough Texas high school basketball games like I have, you’ll inevitably hear complaints of the game not having a shot clock.

Well, the University Interscholastic League shot down a proposal last week. Basketball teams across the state will not have to worry about having one.

Some people feel really strongly about the topic, but I find myself just not caring, actually enjoying the variety that a high school game brings without a shot clock and what it could bring with one.

There’s something about watching an offense work without time constraints that, I guess, I enjoy. Then on the flip side, watching games end in 44-41 scores is not exactly entertaining.

Honestly, I think the 24-second shot clock in the NBA is probably too quick — but they’re an entertainment product, I get it.

I did not know this until I looked it up, but there are eight states that use a shot clock in high school basketball: California, Maryland, Massachusetts, New York, North Dakota, Rhode Island, South Dakota and Washington. Georgia and Minnesota plan to use one in the next couple of years.

There are so many pros and cons for a shot clock or not.

The question of whether or not high school basketball should have a shot clock has been around for quite a while. I think the shot clock in college is great but I think adding it to the high school game takes away a strategy from coaches who may not have the talent that their opponents have.

When an opponent has a lot more talent than you, being able to slow the game down and limit possessions can lead to exciting finishes that just wouldn’t be there with a shot clock.

There are good reasons why I would like a shot clock, as well.

It would definitely come into play and help late in games. The non-clock format helps teams that have the ability to spread you out, especially late in the game. Watching college games, it feels that teams are still in the game down eight or so with a couple of minutes left. In a game without a shot clock, the likelihood of coming back seems more difficult.

I think it would also help the officiating. The six-feet closely guarded rule is a non-existent call now. It has dwindled to two feet, which again helps the quicker, more athletic teams, especially late in games.

Another way I think it would help officials is coaches have to be more engaged in situations during a possession as opposed to worrying about past calls.

For me, it’s all basically comes down to me being a die-hard basketball fan. I can lean any way and it will be just as much fun to watch.

A 24-second clock, maybe not in high school. A 30- to 35-second clock we could all probably live with.

For the most part, when do we ever see many high school teams that don’t turn it over in a span of time anyway unless the point guards are All-State caliber?