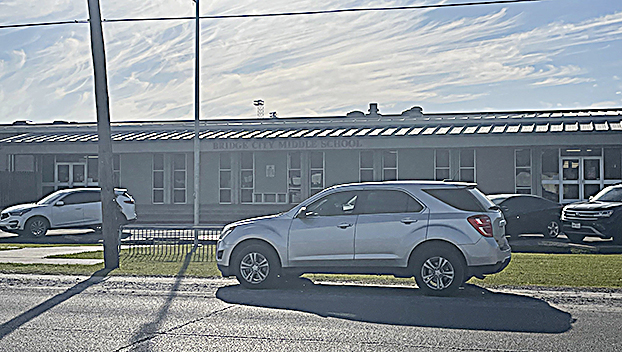 School District officials said renovating and adding onto the existing middle school would cost approximately 80 percent of a new facility.

The middle school is currently a financial drain for the district, according Bridge City Independent School District Superintendent Mike Kelly.

“There are daily struggles at that campus that we don’t have at our other campuses that are more modern,” Kelly said.

“The pipes in the ground are clay pipes, so you can imagine we have collapsed pipes that are in our bathroom or in our electrical rooms. And they’re clay — I mean you don’t just switch out some PVC and fix it. Everything you go over there and fix is a challenge.”

Kelly and Technology Director Natasha Ray say the middle school, built in 1962, does not have the program capacity to teach students in a modern way.

For one, every classroom is the same size; there’s cinderblock walls.

“It doesn’t matter if you sit in math or in science or in theater or in a science, technology, engineering and math (STEM) or a shop class where we have woodshop stuff down there at the middle school, they’re all out of the same classroom,” Kelly said. “It doesn’t have the setup to educate students like they need to be educated today.”

The Bridge City ISD school board voted 7-0 Feb. 14  in favor of holding a Bond Election with two propositions on the ballot, including a new Middle School and a Career and Technology facility at Bridge City High School.

The idea for the new buildings arose when Kelly saw the elementary school having two portable buildings with four classes. This prompted a demographic study to forecast future growth in the district.

“That point was really what made me look at doing a demographic study and seeing what kind of growth we can see over the next several years,” he said. “Because what happens is, if you’re too late on building — the building process from a bond to the whole piece is about a three-year process. So, if you miss it, and you’re late, then all of a sudden, you’re going to go get portable buildings and putting them all over your district and portable buildings are one, very expensive, and two, not a great place to educate kids.”

According to the demographic study posted on the Bridge City ISD bond website, Bridge City ISD is forecasted to close roughly 25-35 new homes annually for the next 3-5 years and the district has more than 130 lots available to build on and more than 50 planned future lots.

Kelly also said the study is forecasting an estimated 400 students, which he said is a very conservative number due to the Chevron-Phillips Chemical Expansion and Entergy Power plant that is estimated to add 350-520 permanent jobs to the local workforce, according to the study.

Kelly said districts have to call bonds for larger projects such as the buildings as it is not something a district could possibly save enough money for in an efficient amount of time.

“We’re wanting to build a new middle school, and then a new career and technology education, CTE building. These amounts, $57.7 million and $14.7 million, that’s not something you could ever save up in a fund balance. That’s the reasoning behind the bond, we have to go get taxpayers’ help.”

Kelly said the bond is different, addressing past concerns regarding BCISD bonds, as the propositions are all academics-related, the voters can vote on which proposition they want to pass (A or B or both) and that there will be more transparency.

The estimated total yearly tax rate increase for proposition A is 16 cents, with proposition B at five cents and the two propositions combined being 21 cents.

The Bond propositions will have zero tax impact for senior citizens with an age 65 freeze and no significant home improvements.

Constituents can see their personal tax impact by using the tax calculator located at bridgecitybond.com.

Ray said technology is a major factor the district is considering when looking into building a new middle school.

Ray said the classroom dynamic has flipped dramatically since 1962, when the teacher stood up at the front of a room and talked and the students absorbed.

“Now we have a very student-centered classroom, where the students are involved,” she said. “They learn collaboratively by working with not only other kids in their classroom, they can (also) meet with kids globally all over the world to learn things and that building is just not equipped to handle the kind of teaching that we’re doing today.”

Another factor Kelly discussed when it comes to renovating the middle school: The cost to put students in portable buildings while the building is in the renovation process.

“In rebuilding the middle school, it’s about 80 percent of the cost of just building the building new, and part of that is because over $10 million is what it would cost for us to be in portable buildings while the renovations took place,” he said. “It’s a terrible use of taxpayer money, but it’s just not a great option all the way around.”

The school will also be located across the street from the current Middle School campus and have a capacity of 900 students.

The proposed campus will be equipped with upgraded safety and security features and updated technology access and infrastructure and will have space for all programs, courses and support areas including a Media Center, Cafeteria, Fine Arts (Band Hall/Choir/ Performance Platform), CTE, Science Labs and Athletics (Gymnasiums/ Locker Rooms).

— By Tim Cohrs, reach him at tim.cohrs@orangeleader.com