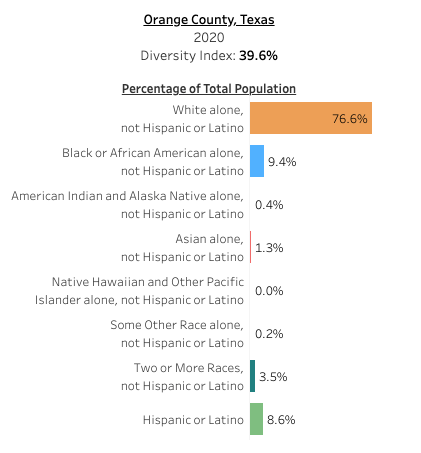 With a growth in population, of almost 16-percent, Texas will gain two seats in U.S. House of Representatives according to the 2020 Census data released on Thursday,

The state’s Hispanic population is now nearly as large as the non-Hispanic white population, with Texas gaining nearly 11 Hispanic residents for every additional white resident since 2010. Those trends set up a pitched battle for political control when state lawmakers redraw legislative districts, according to the Texas Tribune.

Texas is the sixth in Highest Diversity Index at 67-percent according to Census Data.

Orange County’s population diversity has changed little in the last 10 years according to the numbers. Blacks or African Americans grew just under one percent while whites decreased by more than two percent.

Texas had the largest numeric growth in housing units with 1,611,888.

“While the national number of housing units grew over the past decade, this was not uniform throughout the country,” said Evan Brassell, chief of the Housing Statistics Branch in the Census Bureau’s Social, Economic and Housing Statistics Division. “Counties that composed some part of a metropolitan or micropolitan area saw increases of 3.8-percent, on average, while counties outside of these areas showed decreases of 3.9-percent on average.”