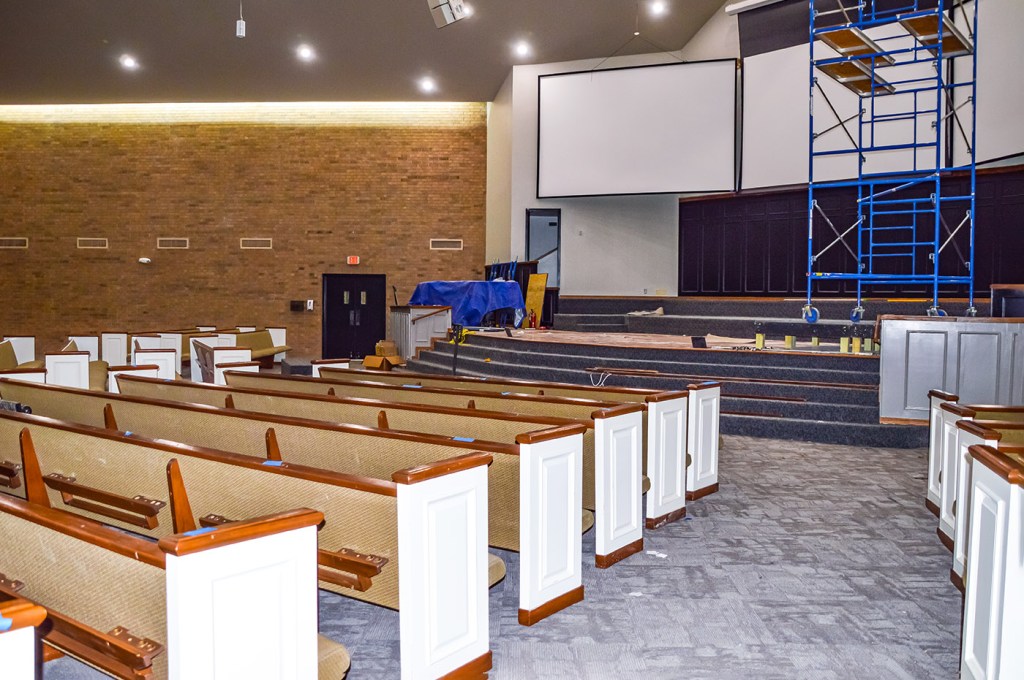 Hurricanes Laura and Delta left their marks on Orange almost a year ago when the storms blew through the area recking havoc and destroying buildings. During the catastrophe, North Orange Baptist Church was hit hard by both storms.

Water and wind damaged lead to the need to replace all the air conditioning units for the Worship Center which also houses the church administration, meeting rooms and adult education classrooms as well as the sanctuary.

“One 10-ton A/C unit was picked up and dropped 10 feet away during the storm,” Pastor Chip Anthony said.

Another unit went through the roof according to church member, Harry Woods

Water damage also led to the loss of pews. Water intrusion caused to the destruction o the roof during the two storms.

“We lost half the pews,” Woods said. “We are adding a café style with tables and chairs along with the pews we could save. We will still have the center aisle for weddings.”

From rooftop to flooring, the church took future storms into consideration during the $2.5 million restoration.

“The flooring is individual squares,” Anthony said. “So, if one is damaged, the one square can be replaced. They have a rubber backing so you can take them out, let them dry and return them.”

While in the transition phase, the church had to think outside the box.

“We used tables so families could sit together and keep the children with the parents,” Woods said. “We would provide color pages for the kids which tied into the sermon.”

While chandeliers may be gone, as lighting is replaced with LEDs, returning to the sanctuary on Sundays will be welcomed as another step towards returning to normalcy after the pandemic, two hurricanes and a winter storm striking the area.

A church use to serving others such as offering the building to Little Cypress Elementary after hurricane Harvey, as well as host the Nativity Village every other Christmas, is looking forward too giving back to the community again.

“We were planning a community outreach but it has been difficult as we are trying to recover still,” Anthony said.

The church is also home for Tekoa Academy.