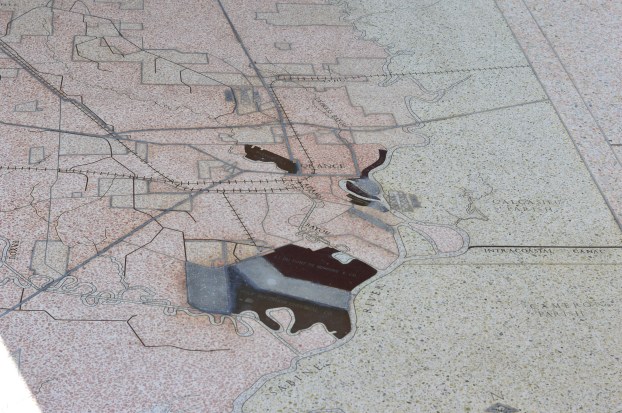 Dawn Burleigh/Orange Leader A map created in the breezeway of what is now the Port of Orange. The map reflects the properties of Lutcher and Moore Lumber Company.

(Editor’s note: This is part two of a two part series on the history of sawmills in Orange.)

Jordan shut down his mill in the summer of 1889 due to the price drop of shingles and a scarcity of cypress logs.

George Bancroft built a mill in 1877 able to process 50,000 feet of lumber and 90,000 shingles daily. The Bancroft mill was the first in Orange to use a dry kiln.

Thomas Bancroft died in September 1896 ownership passed to his sons. The brothers began to try to expand, They bought land, railroad cars, rails, and a locomotive. They soon had a massive debt.

George Bancroft had remained with the mill as superintendent for Kirby. In 1902, he resigned. In 1901, he had organized Orange National Bank and become president. He left the mill to become a fulltime banker.

Kirby had operated the mill as “Mill D”, they were the owners and Bancroft had been superintendent. After Bancroft left, the mill started a period of unprofitability. In 1904, Kirby sold the mill for $60,000 to the Miller-Link Lumber Company.

Leopold Miller had come to Orange from Germany in 1881 and became a retail merchant. He began to invest in timberlands in Jasper, Newton, and north Orange counties.

In 1887, Miller bought a large shingle mill from Sheriff G.W. Michael and in 1888 organized the L. Miller Lumber and Shingle Company. The mill made a daily cut of 100,000 feet.

Miller began a partnership with J.W. Link. They bought the old “Mill D” from Kirby in July 1905. Link had become interested in sawmilling and guided the company’s financial progress.

On September 1, 1908 Miller-Link tried to expand into Newton County and bought the Newton Sawmill Company sawmill at Newton. The mill produced 50,000 feet per day.

1909 saw overproduction and plummeting prices to the point that Miller-Link had to close the Newton mill to keep the Orange mill in operation.

In 1910, Link sold his interest in the company and moved his family to Houston.

Recorded history of the company’s last few years is unclear, but in 1922 the company went bankrupt and was auctioned at a bankruptcy sale to the Peavy-Moore Lumber Company and the old Miller-Link mill was dismantled and moved.

The Orange Lumber Company started as a shingle and sawmill built in 1876 by McKinnon, Jackson, and Downs. In 1879 McKinnon bought out his partners and the firm became John McKinnon and Company.

By 1881, McKinnon’s health was failing and he sold the company to the M.T. Jones Lumber Company of Houston.

The name of the McKinnon mill changed to the Orange Lumber Company in March 1889.

In 1891, the controlling interest in the neighboring sawmill, Wingate and Company had passed to the M.T. Jones Lumber Company and the Orange Lumber Company was converted into a joint stock company.

The Wingate mill burned for the third time in April 1902 and the Orange Lumber Company mill burned down on March 28, 1905.

The Orange Lumber Company mill was rebuilt and by September 1906 was cutting at a rate of 100,000 feet per day.

The mill burned for a second time in November 1918 and since its stumpage was nearly exhausted, the mill was not rebuilt.

Henry J. Lutcher and G. Bedell Moore formed the Lutcher and Moore Lumber Company in 1877. Their firm would be the largest and longest lasting in the history of sawmills in Orange.

The mill remained in steady operation from 1877 to 1930. For a time, there were two mills, the Upper Mill, and the Lower Mill. At peak capacity, the mills cut in excess of 150,000 feet of lumber per day.

Lutcher and Moore could not survive the Great Depression that started in 1929 and in 1930 shut down the mill. The efforts to start back in limited production proved to not be feasible. Finally, in 1970 the remaining sawmill machinery and timberlands were sold to Boise Cascade. The equipment was removed from the sawmill and taken to other Boise Cascade mills for use in them.

When the final load of machinery left Orange, the history of sawmilling in Orange ended. Roger’s Lumber Yard, on Old Hwy 90, is the only one remaining in Orange.

By Dawn Burleigh In what is now a soccer field in the Cove area, across from the Port of Orange,... read more