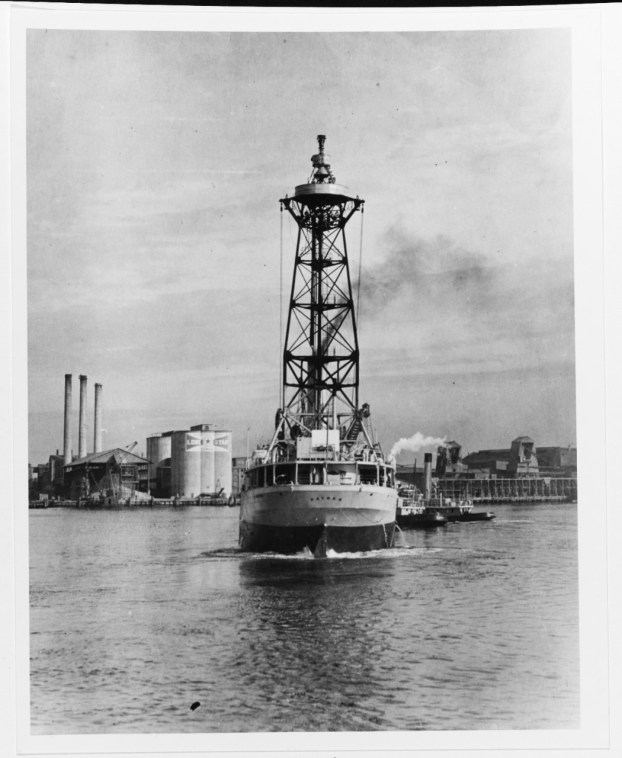 And Now You Know: How the USS Patoka influences the design of The Rainbow Bridge

Efforts to build what would become the Rainbow Bridge began in 1927, when C. G. Parker, Allan Smith, and William Lea of Orange began a campaign to replace the Dryden Ferry.

At that time, travelers between Orange and Port Arthur often had to wait as long as five hours for their turn on the ferry to cross the mouth of the Neches River and Old River Cove on the northwest corner of Sabine Lake. The only alternative was to drive through Beaumont to go from Orange to Port Arthur.

Officials in Orange and Port Arthur agreed that a bridge was needed, but officials in Beaumont were adamantly against a bridge. Their position was a bridge would be a menace to navigation and would impede river traffic to their established port.  The Beaumont Chamber of Commerce thought that another ferry or a drawbridge would suffice.

In 1931, an agreement was reached between Orange County, the State of Texas, and Jefferson County to split construction costs. The War Department ratified the plans, but Beaumont continued to fight the bridge.

Finally, in October 1934, Beaumont agreed to the building of a bridge if the vertical clearance would be tall enough so as to not impede any ship that would pass under it, namely the tallest ship in the U. S. Navy.

Having finally silenced the opposition from Beaumont, construction on the bridge began in March 1936. Construction continued for two years and the bridge was dedicated on September 8, 1938. The bridge is 7,700 feet long, the extreme height is 230 feet, and clearance from the bottom of the bridge to the mean tide height is 177 feet. The grade is 5 percent, or a rise of five feet for each 100 feet of length. The cost of the bridge was $2,713,294. In today’s dollars that is about $43,354,948.

The Navy’s tallest ship at the time was the USS Patoka. The Patoka had been built in 1919 and launched as a fleet oiler. Fleet oilers were known in the civilian fleets as “tankers”. The Patoka was 477 feet 10 inches long, 16,800 tons displacement, 60 feet wide, and could cruise at 11 knots. After launching, she sailed to Port Arthur to take on a load of fuel oil for Scotland. She returned to Port Arthur once more for a cargo of fuel oil destined for the Adriatic Sea. She later served on both the East and West Coasts until 1924 when she was selected for conversion to a tender for the airship Shenandoah.

The conversion involved additional accommodations on the Patoka for the airship’s crew, and facilities for the storage of helium and fuel for the airship and equipment for the handling and storage of three seaplanes. There was also a mooring mast installed for the Shenandoah to dock to. The top of the mast was 125 feet above the waterline.

The Patoka served the Shenandoah until the airship was lost in a storm in September, 1925. She then served the airships Los Angeles and Akron. The Los Angeles was decommissioned in 1932, and the Akron crashed in April 1933 and was a total loss. The Navy decided to abandon the airship program.

The Patoka was decommissioned in 1933, but was still on the Navy rolls. Thus, the bridge was built for the clearance of a decommissioned ship intended to serve airships no longer in existence.

In 1939 the Patoka was recommissioned, and reclassified as a fleet oiler. She was refitted to her original configuration and would serve throughout World War II in several theaters of war as both a fleet oiler and seaplane tender. She was once again decommissioned; she was struck from the Navy List in July, 1946 and sold for scrap in 1948. Her mooring mast was still in place.

At the time of its opening, the bridge was the largest bridge construction project ever undertaken by the Texas Highway Department. The Rainbow Bridge has been touted as “The Tallest Bridge in the South.”

The tall, steep, somewhat narrow bridge has been a rite of passage for drivers in the decades it has been in use. In the days after the bridge first opened, many drove across the bridge and then drove back across the bridge, both for the thrill and the view. In later years, the bridge became the bane of many new drivers. Driving across the bridge in the years when it was a two-way bridge took nerves of steel for many first time teenage drivers. The steel structure of the bridge coupled with the handrails flying by and the original curb-type walkway on the right side of each lane combined to give a claustrophobic feeling; added to this traffic passing on the driver’s side that appeared to be at a stratospheric speed, you had for free the feeling more often experienced on a carnival ride.

A recent picture of the bridge posted on the internet social networking site, Facebook, generated over 130 comments about driving over the Rainbow Bridge and some general feelings about the bridge.

The Rainbow Bridge was closed in 1992 for a time to be refurbished. The project included sandblasting and repainting the structure, doing repair and replacement of some sections, adding a new concrete deck and widening the lanes from 22.5 feet to 28 feet.

When the bridge was built it was an engineering masterpiece. It has stood through numerous hurricanes and floods that tested both its resistance to wind and water. The bridge has an elegance that new bridges do not have. It also has 5.5 feet in width a lot of its early day drivers wish it would have had decades earlier.

Friends and family gathered on Saturday as the City of Pinehurst unveiled the honorary name of Zerko Lane for Peacock... read more