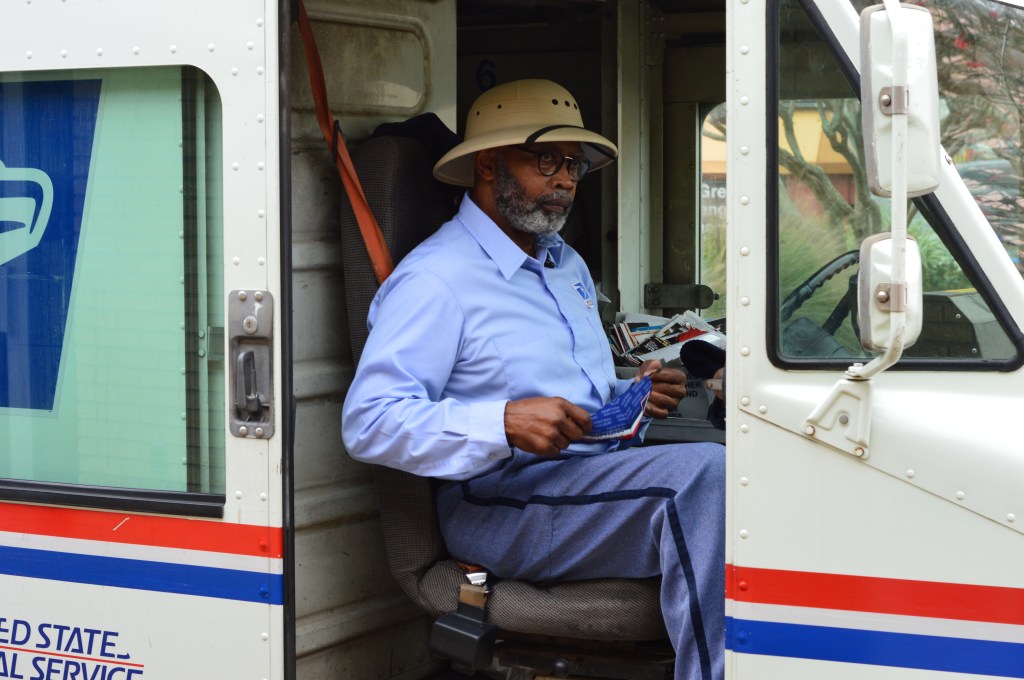 Dawn Burleigh/Orange Leader Mail carrier Roosevelt Spears III is on his route delivering mail on one of his final days prior to retiring at the end of 2020.

After 42 years of delivering mail, Roosevelt Spears III plans to retire at the end of this year.

“I have enjoyed it, and I still do,” Spears said. “I always said that when the time comes, I want to leave while I still enjoy it.”

One reason he has enjoyed his service with the post office is because it is such a significant part of American history.

In the more than two centuries since Benjamin Franklin was appointed the first Postmaster General in 1775, the Postal Service™ has grown and changed with America, boldly embracing new technologies to better serve a growing population.

Spears said he has seen many changes over the years.

“It is much more efficient now,” Spears said. “The changes in the vehicle over the years too. We went from jeeps to bicycles to KLV. The KLVs are not big enough anymore.”

Although the vehicles make delivery easier and faster, Spears misses the door to door service.

“I miss the one on one with customers, especially the elderly. They are the best part of the job.”

Starting in the post office at the age of 19, was his second choice in careers. While attending Lamar University, he worked as a contractor at a plant.

I was working as a contractor at DuPont for a little over a year when there was an explosion,” Spears said. “The building where is happened is where we were supposed to be after our break. That was the deciding factor.”

Until that moment, he had intentions of following in his father’s footsteps.

“I had two older cousins working at the post office,” Spears said.

It was at the post office that he met a man he looked up to as a mentor and friend, Kelly Price Sr.

“We traveled together to postal seminars,” Spears said. “He treated me like I was one of his own.”

The values Price taught Spears are the same one Spears passes to the next generation as they start their careers at the post office.

“I am one of most blessed persons on this planet,” Spears said. “I was raised by my parents, my Aunt and Uncle and the Prices. They all helped raised me.”

Spears recalls a time when Price asked Spears to drive to Jackson, Mississippi with him.

“He said he would keep me company,” Spears said with a laugh. “We made it to Lake Charles before he fell asleep on me.”

The two traveled to San Antonio and Washington, D.C. together for seminars for the post office.

“I believe in giving,” Spears said. “I give helpful advice because someone did for me.”

Married for 35 years, he and his wife raised three children along with countless foster children.

“We were foster parents for 22 years,” Spears said.

One of Spears sons is following in his dad’s footsteps. The younger Spears has been with the post office for approximately five years now.

Over the course of Spears career, he has worked in almost every area of town, but has been in the West Orange and MacArthur area for the last 20-25 years.

In all his years, he was never bitten by a dog.

“It was close several times,” Spears said. “But it is not nearly as bad today as it once was. Leash laws help and people keep them tied up. It used to a huge problem.”

Spears said he will miss the people along his routes the most.

“I was always a people person. I never met a stranger,” Spears said. “I have met so many great persons over the years.”

He added it taught him a valuable lesson.