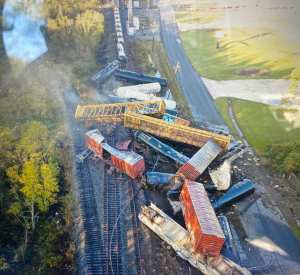 A KCS train derailed along State Hwy.  62 and Farm to Market Road 1130, just west of the State Hwy. 62 overpass, in Mauriceville was reported this morning.

The derailment involved 25 rail cars – 10 rail cars empty and 15 rail cars loaded. Five confirmed tank cars were breached, four were leaking a petroleum product that did not represent a risk to the general population and the fifth involves a corrosive product that is being contained.

Due to the incident, a power outrage has occurred affecting 2,383 customers.

At the time of the derailment, out of an abundance of caution, a one-mile exclusion zone was established and will begin reducing that zone in the next several hours.

As of 8:03 a.m., all students at Mauriceville Elementary and Mauriceville Middle School are now being evacuated to the high school. Parents can pick their Mauriceville students up there.

Please be patient as the staff will be concentrating on the safety of your child, in getting them evacuated and getting them safely released to you.

Middle School students riding the buses were taken to the high school.

DPS is assisting railroad authorities with traffic control near the incidence.

Hazmat crews along with the Orange County Sheriff’s Office, Mauriceville ESD 4 and several other agencies are working together to assess the situation.

There are no injuries reported at this time and approximately 600 residents are affected. KCS is working quickly with the local and state agencies to clean the spilled products. 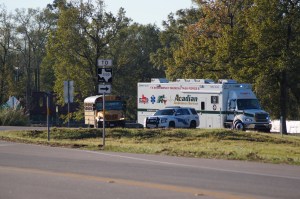 We will update as we have more information.