OP-ED: The Paradox of Prosperity 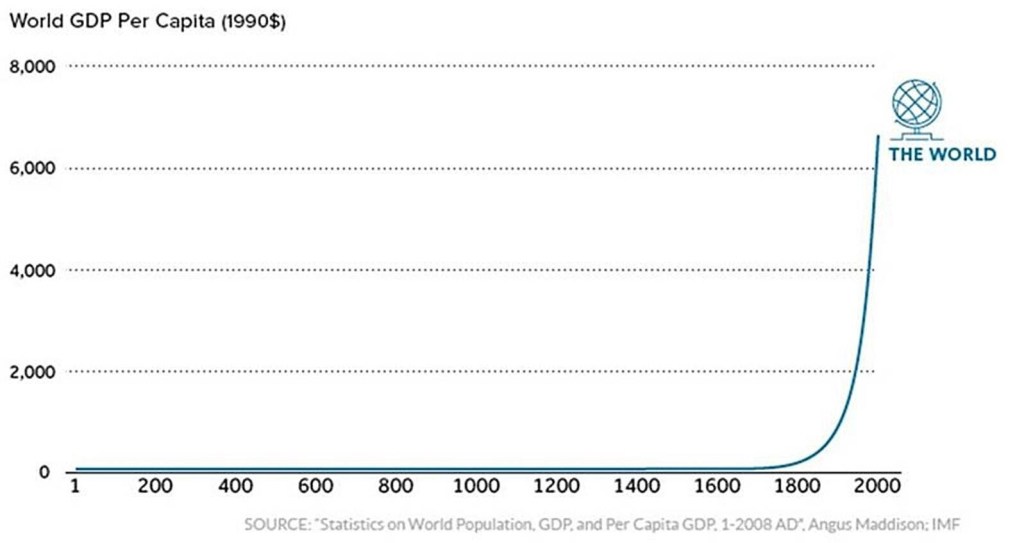 Courtesy graph This graph of world per capita wealth over the last 2000 years tells an amazing story. A chart of U.S. per-capita GDP growth shows a similar trajectory over the last 230 years.

In Friedrich Hayek’s 1954 book Capitalism and the Historians, the late French philosopher and political economist Bertrand de Jouvenel noted a baffling historical trend: “Strangely enough, the fall from favor of the money-maker coincides with an increase in his social usefulness.”

In surveying the history of capitalism from its inception in the late 18th century to the mid-20th century when he was writing, de Jouvenel was struck by an ironic and counterintuitive phenomenon. By “money-maker,” he meant the capitalist entrepreneurs who became rich by supplying the masses with more consumer goods. Entrepreneurs generated the economic growth that uplifted standards of living; hence, their “social usefulness.”

De Jouvenel aptly wrote “strangely enough” to characterize the fact that as capitalists raised standards of living in each succeeding generation, the hatred of capitalists increased instead of diminished. This is paradoxical, but true. The more prosperous our society has become, the more the creators of that prosperity and the system that enables it have been vilified. How dare those wicked capitalists break the iron grip that abject poverty had held over the masses of human beings throughout millennia of history!

Mass poverty was the norm for centuries. That finally began to change in the late 1700s with the emergence of capitalism. The 19th century socialist reaction to capitalism condemned capitalism for not prospering every human being equally and simultaneously. It’s true: some prospered before others. As I have explained before, the reason that there was not faster economic progress for more people in the 1800s was not because of evil capitalists exploiting workers, but simply that there were not enough capitalists to “exploit” (employ) more workers and mass produce more goods.

Looking at the graph, you can see that economic growth accelerated explosively in the 20th century. (Note that growth became much more rapid after the end of slavery, which debunks the fallacious assertion that America’s great wealth depended on slavery.) In the United States, per capita income rose (in 1990 dollars) from $5301 in 1913 to $31,178 in 2008 and life expectancy from 53 years to 78 years. In short, more Americans are living longer lives at higher standards of living than ever before due to our capitalist system. That has happened despite the considerable handicaps of bureaucratic regulation, wasteful pork-barrel politics, and government redistribution of wealth. [There is also more prosperity outside the United States than ever. See chart above and my article “Ready for Some Good News?”.]

Despite the astounding success of the free enterprise system in producing unprecedented prosperity, antagonism toward capitalism is growing, and popular politicians are adopting platforms that are essentially socialist. Indeed, the paradox of prosperity that de Jouvenel noticed almost 70 years ago remains firmly intact, for capitalism has never been more fruitful and never more hated by its beneficiaries than it is today.

The present fascination with socialism and hatred of capitalism reflects a combination of willful historical blindness, lack of simple common sense, and inexcusable economic ignorance:

Anyone even casually familiar with 20th-century history should know that socialism has failed miserably, causing economic retrogression and impoverishment wherever it has been tried.

Most appalling and bitterly ironic about so many Americans enthusiastically, even fanatically, espousing socialism in 2020 is that this year marks the centenary of the most important economic discovery of the 20th century: In 1920, the Austrian economist Ludwig von Mises explained with irrefutable logic that socialism must inevitably discombobulate and reduce economically rational production because it obliterates the market-based price system necessary to coordinate production. Shame on the economics profession for remaining silent about this fundamental truth and allowing dangerous economic ignorance to persist.

Fact: It is free-market capitalism that has made us wealthy beyond the wildest dreams of our great-great grandparents. Fact: The socialist alternative simply does not work. For anyone to favor replacing the world’s greatest wealth-creating system with a proven wealth-destroying system is to spurn prosperity, forsake rationality, and court destruction. That is the grim reality of the paradox of prosperity.

Dr. Mark W. Hendrickson is a retired adjunct faculty member, economist, and fellow for economic and social policy with the Institute for Faith and Freedom at Grove City College.